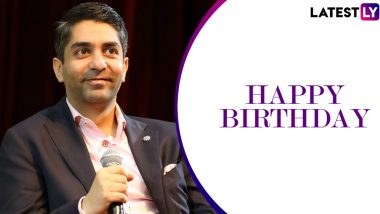 India’s first and only individual Olympics gold medalist, Abhinav Bindra celebrates his 38th birthday on September 28, 2020 (Monday). Bindra won the Olympic gold medal at the 2008 Beijing Olympics which was also India’s first Olympic gold medal since 1980. Bindra is the first Indian to have held the World and Olympic titles for men’s 10-metre air rifle events concurrently. Bindra has also won nine medals at the Commonwealth Games and three gold medals at the Asian Games. As he celebrates his 39th birthday, take a look at some lesser-known facts about Abhinav Bindra. Olympics Around the Corner, Would Be Lovely to Have Athletes Train Together: Bindra.

Bindra has won over 150 medals in his 22-year career and has also received the Padma Bhushan for his contribution to sports over the years. He has also served as a goodwill ambassador for the Indian contingent during the 2016 Rio Olympics. Bindra retired from shooting post the 2016 Olympics and has been appointed to the post by the Indian Olympics Contingent (IOA. Take a look at some interesting facts about the Bindra.

The Olympic gold wasn't the only history Abhinav Bindra made in his shooting career. From making his debut at the age of 15 as the youngest participant in the 1998 Commonwealth Games and the 2000 Olympic Games, he went to become a seven-time Commonwealth medallist, including a four-time gold medallist. Bindra won three successive gold medals in the 10m Air Rifle Pairs event and also clinched his maiden gold in the 10m Air Rifle singles event in 2014. He was also a gold-medallist at the Asian Shooting Championships in Doha.

(The above story first appeared on LatestLY on Sep 28, 2020 08:00 AM IST. For more news and updates on politics, world, sports, entertainment and lifestyle, log on to our website latestly.com).