Ahead of Ashes 2019, Here's a Quick Look Back At Last England vs Australia Test Series 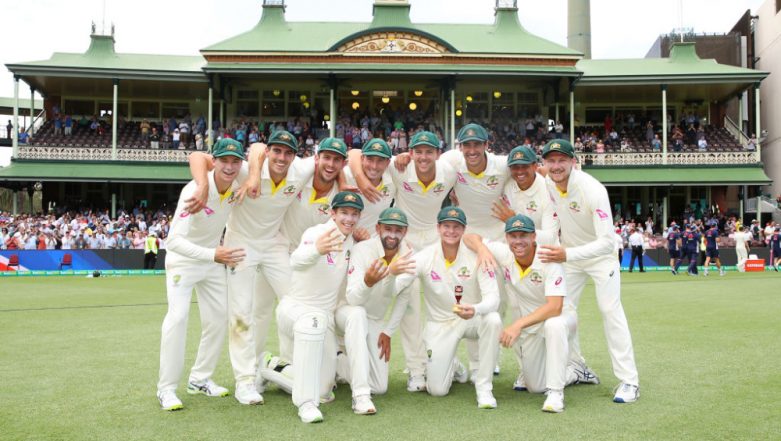 The 2017/18 Ashes series down under proved to be a one-sided campaign which saw hosts Australia dominate in all departments of the game and each and every Test. The Oz showed great determination to reclaim the Ashes they had lost in 2015. They won the series 4-0, making their opponents look ordinary at times. England’s batting proved to be their Achilles heel and often led to them losing key moments of the game. In the end, it was just a matter of who wanted the Ashes more – and in this case, it was clearly the Australians. England vs Australia, Ashes 2019 Schedule With Match Time in IST For Free PDF Download: Full ENG vs AUS Test Series Time Table, Fixtures and Venue Details.

Let us look back at the highlights of the five-Test series.

England having won the toss decided to bat first and got off to a decent start with their middle-order led by James Vince performing well. The visitors got 303 onboard while Australia managed a 25 run lead thanks to Steve Smith’s hundred. The Aussies came charging at England in their second innings leading to a batting collapse with Mitchell Starc picking up three wickets. The poor show with the bat meant, Australia needed 170 runs to win which they got to without losing a single wicket. David Warner, Steve Smith and Cameron Bancroft Return to Australian Test Side As Selectors Name Squad for England vs Australia Ashes 2019 Series.

Youngster Shaun Marsh showed his true calibre on the biggest of the stage as his century helped the Oz reach 442/8 in the first innings. England were poor with the bat and could rarely match the quality attack by the home side’s bowlers particularly Nathan Lyon. Jimmy Anderson’s five wickets brought back some life on the game as the Australians were bundled out for 138 which meant England needed 354 runs to win the test. But another dramatic batting collapse left England all-out for 233 handing the hosts the game.

A wonderful partnership between centurions David Malan and Jonny Bairstow meant England put on 403 on the board batting first. In reply, Steve Smith continued from where he had left behind in Brisbane as he scored a magnificent double ton to take his side to a mammoth 662 runs. The pressure of falling 259 runs behind was always going to be a tall order for England and Josh Hazelwood’s five wickets ensured Australia won the game by 41 runs without having to bat again. Ashes 2019: Jofra Archer Named in England Squad for First Test; Ben Stokes Reappointed Vice-Captain.

After three successive defeats, England finally managed to stem the tie with a draw but the series was long gone. In response to Australia’s 327, English opener Alastair Cook who had a nightmare series so far stepped up with a fighting knock of 244*. England did manage to get 164 run lead but their run rate barely crawled over 3. This gave Australia the chance to stage a fighting comeback with Steve Smith’s century forcing a draw.

Australia’s dominant batting was the difference between the two sides again as the hosts piled on 649/7 in their reply to England’s 346. This brilliant display meant England’s defeat was inevitable and Pat Cummins chipped in with 3 wickets to help register an innings and 123-run win for Australia. The hosts thus won the series by a 4-0 margin with many brilliant individual performances.  Why is Ashes Series Called So? Know History Behind England vs Australia Test Series.

Australia enjoyed the upper hand in the last Ashes series and it will be interesting to see how England respond at home to reclaim the trophy from their arch-rivals.