Ahead of ICC Cricket World Cup 2019, Here’s a Look Back at How India Fared at the Last Edition of the CWC 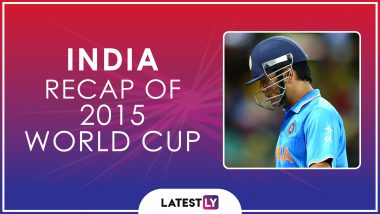 In the 2015 edition of the ICC Cricket World Cup, which was held in Australia and New Zealand, MS Dhoni was in charge of the Indian national cricket team. The Men in Blue started the tournament as defending champions after having won the 2011 Cricket World Cup. However, the Dhoni-led side failed to go past the semi-final’s stage and were knocked out by eventual champions Australia. ICC Cricket World Cup 2019 Schedule in PDF: Ticket Prices, Dates, Venue Details & Timetable Available for Download Online.

Group Stage: The Indian team was placed in Pool B along with traditional rivals Pakistan, South Africa, West Indies, Ireland, Zimbabwe, and the United Arab Emirates. India topped the pool and won all its group-stage matches to qualify for the quarterfinal.

Quarterfinal: In the quarterfinal or the Super 8 stage, the Men in Blue were pitted against Bangladesh. India defeated Bangladesh by 109 runs to make it to the last four. Thanks to Rohit Sharma’s 137 India posted 302 and then bowled out Bangladesh for 193 runs. ICC Cricket World Cup 2019: Meet Captains of All 10 Participating Teams.

Semifinal: India faced hosts Australia in the semis and were handed a 95-run defeat. Set 329 to win, India managed only 233 runs and thus failed to defend their title. Australia advanced to the final and defeated New Zealand to win the trophy.

Chris Gayle, Shoaib Malik And Others Who May Retire from ODIs Post CWC19

Most runs for India: Opening batsman Shikhar Dhawan was the top-scorer for India at the 2015 World Cup. The left-hander scored 412 runs from eight matches at an average of 50.51. Dhawan managed to score two centuries and a half-century. Indian Team For ICC Cricket World Cup 2019: Players Who Will Be Playing Their First ODI CWC Trophy.

At the 2019 Cricket World Cup, India is rated as one of the favourites. Virat Kohli is in charge of the team and the Men in Blue will open their World Cup campaign against South Africa on June 05.

(The above story first appeared on LatestLY on May 15, 2019 01:36 PM IST. For more news and updates on politics, world, sports, entertainment and lifestyle, log on to our website latestly.com).