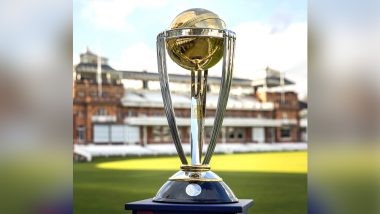 India, who has walked away with the ICC World Cup Trophy twice, will face starting their campaign on June 5 at Hampshire Bowl, Southampton against South Africa. The Old Trafford will host a very exciting contest on June 16. India will face their arch-rivals Pakistan on that day.

ICC Chief Executive David Richardson said, “It’s always an exciting moment ahead of any major event to announce the schedule and for the ICC Cricket World Cup. Next summer fans around the world will be treated to compelling and competitive cricket as the best teams in the world go head to head in this round-robin format for the right to be crowned World Champions.”

“This schedule also gives fans across England and Wales the opportunity to watch world-class cricket on their doorstep with all teams moving around the country. We know from previous ICC events that every country will be proudly supported at each of the venues creating an exceptional atmosphere and a real celebration of the game,” he further said.

Edgbaston and Old Trafford will host the semi-finals and the ICC has also made a provision to keep a reserved day on July 9 and 11. The finals will be hosted by the Mecca of Cricket Lord’s on July 14. Check out the whole schedule below. The PDF of the same is also available for download. Click here: Download Complete ICC World Cup 2019 Complete Schedule in PDF.

(The above story first appeared on LatestLY on Apr 27, 2018 12:42 PM IST. For more news and updates on politics, world, sports, entertainment and lifestyle, log on to our website latestly.com).