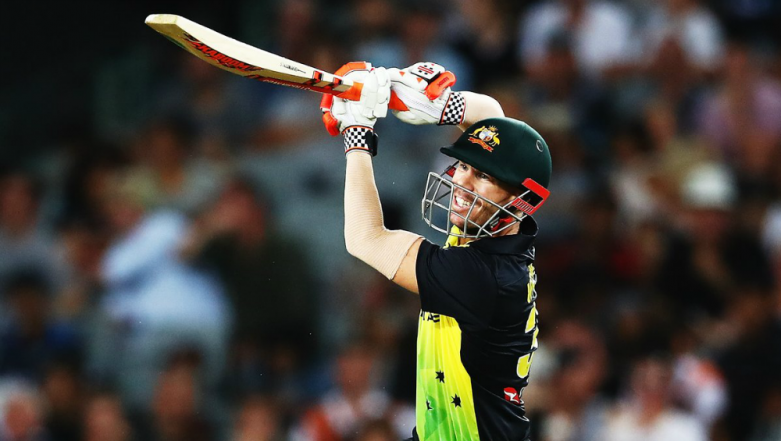 Brisbane, May 6: In what can be termed as a surprising move by the Australian cricket management, David Warner was slotted to bat at number 3 on his return to the side in the unofficial World Cup warm-up match against New Zealand XI at Brisbane on Monday. Steve Smith, David Warner Set for Leadership Roles at ICC Cricket World Cup 2019, Says Coach Justin Langer.

Captain Aaron Finch and Usman Khawaja opened the innings for Australia XI, a development indicating Warner may not just walk back into the opening position for the World Cup beginning May 30 in England.

Warner was in stupendous form in the Indian Premier League (IPL) as he scored 692 runs at a magnificent average of almost 70 in the 12 matches he played for the Sunrisers Hyderabad (SRH). All those runs came at the opening position and he would have thought of opening the innings for his national side as well. However, the Australian think-tank seems to have stuck to the successful opening combination of Finch and Khawaja which they forged in India and the UAE.

The duo put together seven opening stands over 50 in the 10 matches against India and Pakistan, including partnerships of 193, 209 and 134 as Australia's batting order came together following a lengthy fallow period in one-day cricket after Steve Smith and Warner were handed bans for their role in the ball tampering scandal which took place last year in March against South Africa.

With Warner's return, coach Justin Langer had already insisted that it was a good sign for the side to have options for the opening slot. "It's awesome to have options," Langer had said after the training camp here. Australia Squad for ICC Cricket World Cup 2019: Here’s a Look at Australian Team’s Expected 30-Man Players List for the Mega Event in England.

"The way Usman and Finchy have batted together in the Test matches, they played together in the UAE, plus what they did in the last two one-day series is brilliant. Dave Warner's a world-class opening batsman, Shaun Marsh's been brilliant at No. 3, good at No. 4, Steve Smith can probably bat where he likes or wherever he is in the side, so it's really exciting to have those five hundred-makers at our disposal really," he added. Australia will begin their World Cup campaign against Afghanistan on June 1 in Bristol.