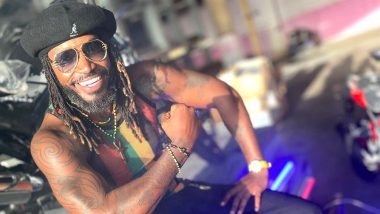 Arguably the most dangerous batsman to have taken the cricket field, Christopher Henry Gayle or Chris Gayle turns 41 on Monday (September 21) and birthday wishes are pouring in from all around the world, Hailing from Jamaica, the southpaw is nothing less than a nightmare for bowlers and his record in all forms of cricket is nothing but sensational. Gayle likes to take on the bowlers from the outset, and his knack of playing big knocks makes him a great asset. With 13296 runs, the West Indies star is the highest run-scorer in T20 cricket. However, his record is likely to get enhanced even more in Dream11 Indian Premier League (IPL 2020) where he represents Kings XI Punjab (KXIP). Chris Gayle IPL Franchise History: List of Teams Universe Boss Has Represented in Indian Premier League.

Along with his significant impact on the field, the self-proclaimed Universe Boss is also known for his great humour. Gayle’s personality is as flamboyant as his batting and cricket fans must be aware of the fact. From his unique celebrations on the field to his off-field antics, the legendary batsman has a lot of ways to entertain his followers. The dashing opener is very active on social media too and is frequently sharing intriguing and hilarious videos. As the undisputed King of T20 cricket turns a year older, let’s look at some of his videos which have made the fans go ROFL! Fastest Centuries in IPL History: Chris Gayle, Yusuf Pathan, David Miller and Other Batsmen Who Dominate the All-Time List of Quick Hundreds.

Watch Out For That Pool!!

These Dancing Videos Have No End!!

What you have planned for me, Weekend? Plz note, I like this type of mood! 😂🥃 #BringThisEnergyAroundMe #HappyWeekend 😉 🤣 🇯🇲

Only me alone can dance on a wet floor... #Caution 😂

(#CEO Chris Ever Okay) I'll give the winner USD 5000 who do the #ChrisGayleDanceChallenge 🕺🏾 the best 😊. Ladies, the challenge goes for you too...There's the video so make sure you're spot on as I am lol. #HaveFun I'll post the top 5 on my page and the viewers choose the winner. Remember to use the HASHTAG! Will announce the winner on the 24th 🕺🏾

With IPL 2020 already underway, Gayle will play a crucial role in guiding KXIP to their maiden title. He has been the cornerstone of the team in the last two seasons. However, tackling the spinner in the dead pitches of UAE will possess a different challenge. Nevertheless, the swashbuckling batsman has aged like fine wine, and the opposition teams can’t afford to be complacent against him.

(The above story first appeared on LatestLY on Sep 21, 2020 08:45 AM IST. For more news and updates on politics, world, sports, entertainment and lifestyle, log on to our website latestly.com).