Chris Gayle’s Indian Premier League (IPL) journey started in 2009. And since then has been part of every single season. Meanwhile, check out Gayle’s franchise-wise stint in the IPL. 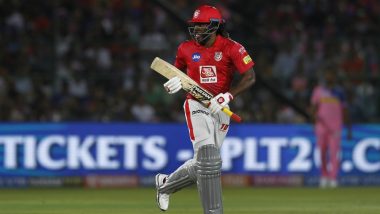 Chris Gayle is an entertainer and a crowd favourite that every team wants. On his day, the Universe Boss can stun best of bowling sides. He has the ability to attack right from the ball one. Lately, the left-handed batsman has had limited explosive innings against his name. Gayle is a globe-trotter when it comes to T20 cricket and has represented many clubs across the world. Gayle’s Indian Premier League (IPL) journey started in 2009. And since then has been part of every single season. The West Indies batsman has represented three franchises in IPL thus far. Kings XI Punjab Team SWOT Analysis: Ahead of IPL 2020 Find Out Positives And Negatives of KL Rahul’s KXIP.

Gayle has played 125 IPL matches and has scored 4484 runs with 175 as his highest score. He has scored six centuries, the most in IPL’s history, along with 28 fifties. The West Indies batsman is on sixth spot on mots runs in IPL list. Meanwhile, check out Gayle’s franchise-wise stint in the IPL.

Gayle spent just two seasons with KKR. In 2009 he played seven matches for the franchise and scored just 171 runs. In 2010, in nine matches, the left-hander could score only 292 runs, including two half-centuries. KXIP Team Profile for IPL 2020: Kings XI Punjab Squad in UAE, Stats & Records and Full List of Players Ahead of Indian Premier League Season 13.

Gayle joined RCB in 2011. At first he went unsold at the auctions, but was later called in as Dirk Nannes’ replacement in the RCB squad. Universe Boss ended up spending seven seasons with RCB and enjoyed his stint with them. He scored five centuries and 19 half-centuries for RCB, which included the world record unbeaten 175.

From 2018 onwards, Gayle has been with Kings XI Punjab and has done well for the team in two seasons, scoring a century and seven fifties. Gayle is set for yet another season with the Mohali-based franchise.

Gayle recently pulled out of the Caribbean Premier League (CPL) due to family reasons. So, the soon to-be 41-year-old player will be fresh for the IPL 2020.

(The above story first appeared on LatestLY on Sep 01, 2020 08:33 PM IST. For more news and updates on politics, world, sports, entertainment and lifestyle, log on to our website latestly.com).