The match would be the first of a double-header on a blockbuster Sunday in the Indian Premier League. KKR and CSK have so far looked really settled and composed heading into the match and the winner of this fixture would get one spot closer to qualifying for the playoffs. 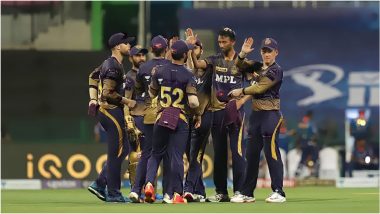 Chennai Super Kings (CSK) would face Kolkata Knight Riders (KKR) in match 38 of the Indian Premier League 2021 at the Sheikh Zayed Cricket Stadium on Sunday, September 26. The match would begin at 3:30 PM IST (Indian Standard Time). Both these sides have two matches each since IPL resumed in UAE on September 19 and it has been nothing short of thrillers whenever these two sides play against each other. When they faced off in India earlier this year, KKR almost pulled off a dramatic chase powered by a 81-run stand between Dinesh Karthik and the big-hitting Andre Russell, later followed by a Pat Cummins half-century. IPL 2021 Points Table Updated

Although they had lost heaps of wickets in their pursuit of 221, being reduced to 31/5, the Knight Riders found a way to claw back into the match. But Sam Curran dismissing Russell and Cummins running out of partners at the end were the points where CSK took control of the game and once again a cracker of a contest is on the cards on a blockbuster Sunday. Check out the weather report for this match on September 26. 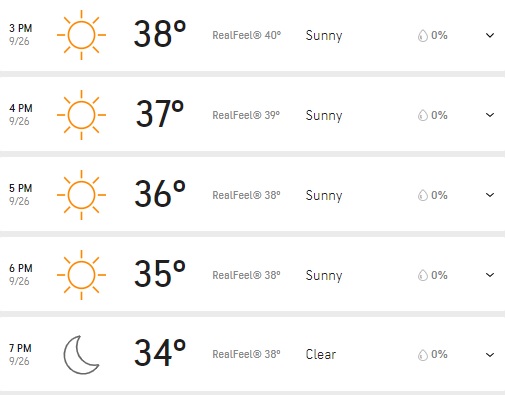 Expected weather in Abu Dhabi at the time of CSK vs KKR clash (Source: Accuweather)

The weather is expected to be a pleasant one for this match and no rain is expected at the time. The temperature seems to be around 34-38 degrees celsius and it would expectedly drop down as the match heads towards the evening.

The pitch at the Sheikh Zayed Cricket Stadium is not expected to change and as we have seen in the past few matches, batsmen get value for shots if they are timed well, especially during the powerplay. It is expected to be a good batting strip as the Kolkata Knight Riders batsmen demonstrated in their run chase against Mumbai Indians. It might become a bit difficult for the team which bowls second as dew would make it hard to grip the deliveries. Nonetheless, a first innings score of 160-170 is expected to be a winning total on this pitch.

(The above story first appeared on LatestLY on Sep 25, 2021 03:44 PM IST. For more news and updates on politics, world, sports, entertainment and lifestyle, log on to our website latestly.com).