Miller played a finisher's role for Rajasthan Royals and scored 88 runs in four games in the Indian Premier League this season. He also featured for South Africa during the ODI series against Pakistan in April. 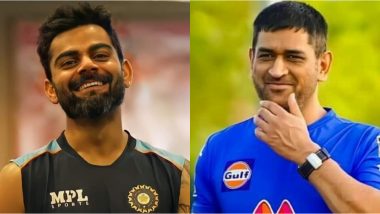 Indian cricket captain Virat Kohli is one of the most highly regarded players in modern day cricket. It is not a surprise that he has fans all over the world and South African batsman David Miller has also turned out to be one of them. Nicknamed 'Killer Miller' for his aggressive style of batting, the Proteas cricketer picked Kohli as the best batsman in cricket today, while answering to tweets during a Q & A named #AskMiller on Twitter. He had last played for South Africa during the ODI series against Pakistan in April. Sports News | All in the Head: Virat Kohli on Lack of Preparation Time for WTC Final

Both Kohli and Miller were last seen in action during the Indian Premier League in April. Miller played a finisher's role for Rajasthan Royals and scored 88 runs in four games. Kohli on the other hand scored 198 runs in seven matches. He would next be seen in action in the World Test Championship final against New Zealand on June 18.

Who other than @imVkohli https://t.co/FIbQR4FsL3

Miller also went on to pick MS Dhoni as the best finisher. Responding to a tweet, he wrote, "One of my favourite cricketers.. Best finisher I’ve seen, very humble and love his calm demeanour." Virat Kohli More Successful Captain Than MS Dhoni After Leading India in 60 Tests

Dhoni might have retired from international cricket but he has inspired many and still continues to do so. The former Indian captain last featured in this year's IPL where he has led Chennai Super Kings to the second spot in the points table after seven matches

(The above story first appeared on LatestLY on Jun 02, 2021 07:53 PM IST. For more news and updates on politics, world, sports, entertainment and lifestyle, log on to our website latestly.com).