Virat Kohli is a more successful Test captain than Mahendra Singh Dhoni after captaining India in 60 Tests, although he still needs to match former India wicketkeeper-batsman's achievements as a leader in limited-overs cricket. 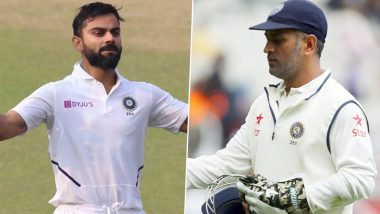 New Delhi, May 29: Virat Kohli is a more successful Test captain than Mahendra Singh Dhoni after captaining India in 60 Tests, although he still needs to match former India wicketkeeper-batsman's achievements as a leader in limited-overs cricket. A couple of days before the India team departs for England for the World Test Championship final against New Zealand (from June 18 to 22) as well as five Test matches against England, Kohli stands alongside Dhoni as the person to have captained India in most number of Test matches. Both have led India in 60 Test matches.

However, Kohli is more successful, having led the side to 36 wins as against Dhoni who led them to 27 wins. The India No. 3 batsman's record as captain outside Asia was garnished with the 2018-19 Test series win in Australia, an achievement that gave confidence to the Indian team under Ajinkya Rahane to repeat the feat in 2020-21. Virat Kohli Picks Two Incidents to Pay Heartfelt Tribute to 'Selfless' MS Dhoni, Says 'Thank You Skipper' (Watch Video).

He has won four Tests in the West Indies (out of six), one in South Africa (out of three), two in Australia (out of seven) and one in England (out of five). He has lost both Tests in New Zealand.

In comparison, Dhoni has led India to one Test win each in New Zealand, South Africa, England and South Africa. Worse, he was at the helm when India were blanked 0-4 in Test series in England in 2011 and in Australia in 2011-12.

No wonder, former England captain Michael Vaughan has called Dhoni better than Kohli across formats, though he felt Kohli is better as leader in Test cricket. Asked in an interview on crictracker.com about who is a better captain, Vaughan said, "MS Dhoni. He's the trailblazer in the white-ball game. He's the best ever T20 captain by a good distance. What he brought to the Indian team was fantastic. Virat is the better Test captain, but across formats, it's Dhoni."

Kohli has captained India in 95 matches, winning 65 matches and losing 27 with one tie and two no result. He has led India in 45 T20Is, winning 27, and losing 14, tying and drawing two each.

In comparison, Dhoni has led India in 200 matches, winning 110, losing 74, tying five with 11 matches producing no result. Dhoni captained India in 72 matches, leading them to 41 wins, 28 losses. He led India to one tied result and two no results.

The win percentage for Dhoni the skipper is not remarkable in comparison to Kohli, but it is the big trophies that Dhoni has won for India that has placed him above the rest.

(The above story first appeared on LatestLY on May 29, 2021 11:14 PM IST. For more news and updates on politics, world, sports, entertainment and lifestyle, log on to our website latestly.com).