DC vs CSK IPL 2020 Dream11 Team: Kagiso Rabada, MS Dhoni and Other Key Players You Must Pick in Your Fantasy Playing XI

A return of 12 points from 8 games is considered title-winning charge in IPL and Delhi have it at the moment. Opponents Chennai have half the points as Delhi and need a string of victories to make it to the top 4. They have done it in the past and it will be interesting to see if they can emulate that in 2020. 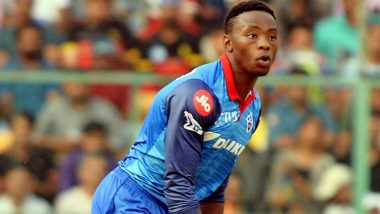 In form team, Delhi Capitals will look to go top of the points table when they face the Chennai Super Kings in the second game of the day. Ricky Ponting has done wonders with the Delhi team as they play with confidence now. They always had the talent but would often head into the game with poor planning, which cost them dearly. A return of 12 points from 8 games is considered title-winning charge in IPL and Delhi have it at the moment. Opponents Chennai have half the points as Delhi and need a string of victories to make it to the top 4. They have done it in the past and it will be interesting to see if they can emulate that in 2020. DC vs CSK, IPL 2020 Match 34 Preview: Chennai Super Kings Eye Another All-Round Show Against Dominant Delhi Capitals.

Dream11 fantasy gaming platform is quite popular among cricket fans who select their teams to win some cash. Correct team selection with best picks is always a winning formula in Dream11. So, find out our tips and suggestions to pick the best players for your Dream11 team for MI vs KKR IPL 2020 match. Delhi Capitals vs Chennai Super Kings, Sharjah Weather, Rain Forecast and Pitch Report: Here’s How Weather Will Behave for DC vs CSK IPL 2020 at Sharjah Cricket Stadium.

The DC skipper has managed 298 runs at an average of 42.57 this season and is one of the reasons for the success of the team. His presence in the middle order adds solidity and he is certain to provide good batting points. He can also be a pick for the captain of the side.

Any Dream 11 contest involving the Chennai Super Kings will be incomplete without the presence of their best batsman – Faf Du Plessis. The Proteas batsman with his elegant technique has managed 307 runs at a staggering average of 51.16. He will have a major role to play if CSK wish to dominate Delhi.

He has not been at his best this season but on a ground like Sharjah, MS Dhoni can showcase some of his old form. It is imperative for the legendry Indian batsman to promote himself up the order so that he gets time to settle down. A perfect choice for your wicketkeeper in the team.

After 25 wickets last season, Kagiso Rabada is on course to better that tally this year as he has already managed 18 in 8 games. He is one bowler who constantly hits the deck hard with an ability to produce brilliant slower ones as well. It will be a real surprise if he fails to get wickets against CSK.

He is a genuine wicket-taker and a key for CSK in the death overs. With 8 wickets in 5 games, he has once again established himself in M S Dhoni’s scheme of things. He will need to vary his length though on a Sharjah wicket that offers precious little to the pacers.

(The above story first appeared on LatestLY on Oct 17, 2020 12:34 PM IST. For more news and updates on politics, world, sports, entertainment and lifestyle, log on to our website latestly.com).