The Knight Riders' poor form continued this season as they were handed their second defeat by Delhi Capitals this season. Rishabh Pant's Delhi on the other hand, returned to winning ways with a bang. 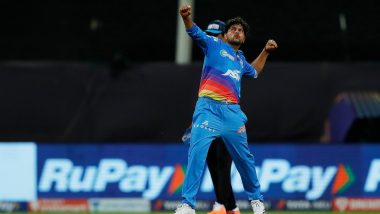 Kuldeep Yadav continued to haunt his former side once again as Delhi Capitals returned to winning ways with a four-wicket win over Kolkata Knight Riders on Thursday, April 28. The chinaman snared four wickets in a brilliant spell of three overs that turned out to be the game-changer in match 41 of IPL 2022. Despite having to chase only 147 to win, Delhi Capitals stuttered but eventually got home with an over and four wickets to spare.IPL 2022 Points Table Updated With NRR

The Knight Riders, consistently changing their playing XI every game, struggled horribly with the bat, scoring only 29 runs in the powerplay, losing two wickets in the process. Captain Shreyas Iyer led a fightback with 42 runs off 37 deliveries but it was Nitish Rana (57), who came good with a timely half-century, that helped his side post some sort of a decent total on the board. Rinku Singh (23) partnered well with him for a crucial 62-run stand. Kuldeep Yadav (4/14) remained the wrecker-in-chief with the important wickets of debutant Baba Indrajith (6), Sunil Narine (0), Shreyas Iyer (42) and Andre Russell (0).

At the break, Delhi Capitals would have hoped that they had the game won and quite comfortably but that was not the case at all. Umesh Yadav (3/24)  gave KKR a fantastic start with a brilliant bit of fielding off his own bowling to send back Prithvi Shaw on the first ball. Debutant Harshit Rana made his mark next with the dismissal of Mitchell Marsh. It looked as if KKR were slowly clawing their way back into the game but David Warner (42) and Lalit Yadav (22) put 65 crucial runs together, which calmed some nerves in the Delhi dugout. But KKR fought back by dismissing both of them and Rishabh Pant cheaply. Despite that brave bowling performance, the target was too less and Delhi won comfortably with Axar Patel (24) Rovman Powell (33*) nailing the finishing act.

#Shreyas Iyer captained his 50th game in the IPL.

#Rishabh Pant reached the milestone of having played 150 T20 games.

#He also scored his 15th IPL fifty and second of the season.

#David Warner completed 1000 runs against KKR, the first player to do so against two teams (Punjab Kings being the other team).

#Sunil Narine got to 150 IPL wickets.

Kolkata Knight Riders are now in a must-win situation every game as they now have five matches remaining. They next face Rajasthan Royals on May 2. Delhi Capitals on the other hand, take on Lucknow Super Giants on May 1.

(The above story first appeared on LatestLY on Apr 29, 2022 12:32 AM IST. For more news and updates on politics, world, sports, entertainment and lifestyle, log on to our website latestly.com).