Stoinis first rescued Delhi Capitals from a 96/6 situation and helped them post 157 runs on board by smashing 57 runs in the final three overs. He took Chris Jordan to the cleaners and smashed 43 runs off his final two overs, 30 of which came in the final over of the innings. Stoinis’ knock of 53 was the fourth fastest fifty for Delhi Capitals. 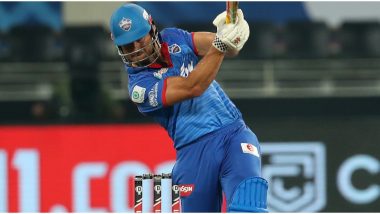 Stoinis first rescued Delhi Capitals from a 96/6 situation and helped them post 157 runs on board by smashing 57 runs in the final three overs. He meted out special treatment to Chris Jordan and took 43 runs off his final two overs, 30 of which came in the final over of the innings. Stoinis’ knock of 53 from 21 deliveries was also the fourth fastest half-century for Delhi Capitals in IPL history.  IPL 2020 Gets its First Super Over, Mayank Agarwal’s Knock in Vain, Marcus Stoinis Heroics; Fans React After DC vs KXIP Match.

The Australian then came to bowl the final over of the innings with KXIP needing 13 runs and with Mayank Agarwal, then batting on 77 from 55, on strike. Agarwal smashed Stoinis for a six in the first ball and a four followed two deliveries later. But Stoinis held on and defended 1 run in deliveries to take the game to a super over. Take a look at some stat highlights from the DC vs KXIP IPL 2020 match.

Agarwal played a superb knock to take KXIP on verge of a win after they were pulled down to 55/5 in the 10th over and needed to score 102 runs from the final 10 overs. Agarwal himself was struggling and was at 8 from 16 deliveries at one stage.

But he slowly came to life and took Kings XI Punjab closer to a win. But with scores tied and three deliveries still remaining with himself on strike, Agarwal missed a bouncer and played the next delivery from Stoinis straight to Shimron Hetmyer leaving Punjab to get one run from one delivery to win. Jordan found Rabada at square leg in the next delivery and the match went to super overs.

(The above story first appeared on LatestLY on Sep 21, 2020 12:54 AM IST. For more news and updates on politics, world, sports, entertainment and lifestyle, log on to our website latestly.com).