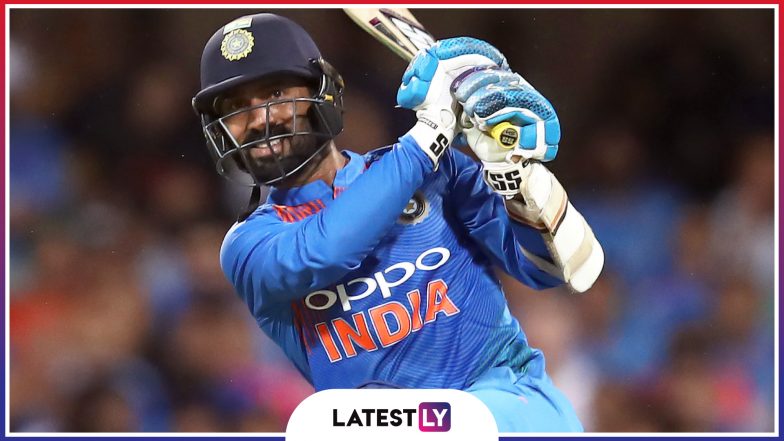 They say 'It's better late than never' and this quote might well have pushed Dinesh Karthik so far. The wicket-keeper batsman replaced Kedar Jadhav in the playing XI against Bangladesh in the ICC Cricket World Cup 2019. The Chennai-born wicket-keeper batsman made his ODI debut way back in 2004 and 15 years later he gets a chance to feature in an ODI World Cup match. It has not been an easy journey for the current KKR Captain who has never been a regular member of the squad. He showed decent signs at the start of his career but the emergence of MS Dhoni meant there was no chance of Karthik donning the gloves. However, He still got few opportunities to play as a batsman and was also the part of the 2007 World Cup squad but didn't get any chance to play in India's poor world cup campaign. India vs Bangladesh, ICC Cricket World Cup 2019 Match Preview: Plugging Loopholes Key as IND Face BAN.

The 34-year-old was also the part of India's winning squad in the ICC World T20 2007 and ICC Champions Trophy 2013 but has always been in and out of the squad due to his inconsistent performances. Karthik also threw his hat in the ring for the no. 4 spot but was never able to seize the position. Rohit Sharma Scores 26th ODI Century During India vs Bangladesh World Cup 2019 Match; Netizens Hail Hitman.

However, He once again burst into the scene last year with an unbelievable display against Bangladesh in the 2018 Nidahas Trophy final. The veteran scored 29 runs off just 8 deliveries which included a last-ball six and guided India to the title. But, even after that he never got settled in the squad.

Nevertheless, the wicket-keeper batsman got a surprise entry in the 2019 World Cup ahead of Rishab Pant. He warmed the benches for the first seven matches and now finally replaces Kedar Jadhav against Bangladesh. Karthik has shown his ability in the India Premier League and will like to stamp his authority in the international tournament as well.