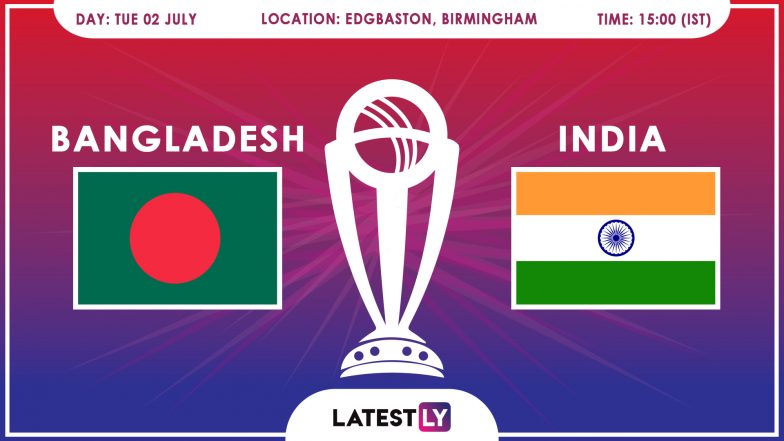 Birmingham, July 1: India have been the in-form team in this edition of the World Cup in England and Wales, Bangladesh on the other hand have been a team which has punched above its weight and shown that they have finally realised the need to be consistent at the top level. Despite a loss to England on Sunday, India go into the game on Tuesday at the Edgbaston Cricket Ground as favourites.

But a look at the history between the two teams will tell you that the Tigers have often roared fiercely when competing against the Men in Blue and this time round, they have momentum on their side. An in-form Shakib Al Hasan, some quality performers in Mahmudullah Riyad and Tamim Iqbal and a skipper in Mashrafe Mortaza who believes in leading from the front. Not to forget the talented Mustafizur Rahman. ICC Cricket World Cup 2019 – Points Table.

Having earned a well-deserved break, the Bangla Tigers are raring to go and they will undoubtedly be banking on their biggest star in this edition - Shakib - to once again lead from the front with both bat and ball. And when it comes to clashes against Virat Kohli's boys, one man who seems to be high on energy is former skipper and wicket-keeper Mushfiqur Rahim. He has a past with the Indian team and while this might not be the best time to jog the memory of the fans, one knows he will be at his fierce best.

India on the other hand have taken a day off on the eve of their game against Bangladesh as they player an intense game against England on Sunday. While it was their first loss of the tournament, it has shown a few areas that do need fine-tuning. To start with, the middle-order needs to get cracking in crunch games. The over reliance on the top-order has haunted the team a couple of times in the past and it was evident again on Sunday.

Yes, it is good to say that it was a one-off, but all it takes is one bad day in the knockout stages to be packing the bag and heading home. While India's entry to the semis is all but certain - need a point - the number four slot still needs some attention. Rishabh Pant did walk in at the fall of Kohli's wicket against England and scored 32 runs, but some of the shots he played were atrocious to say the least. The talented man definitely needs some talking to be done with him.

In the bowling department too, the otherwise perfect seamers of India failed to pick a wicket early and the end result was that Yuzvendra Chahal and Kuldeep Yadav failed to rise to the challenge. Even though Mohammed Shami and Jasprit Bumrah bowled beautifully at the top, the English openers showed that you can play off those two and then make hay.

It was a much-needed wake-up call before teams move into the knockouts and the Indians will do well to sit down in the meeting room on Monday and plan ahead for big battles that await come the semis.