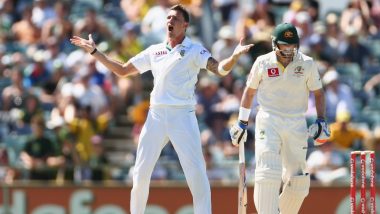 Born on June 27, Dale Steyn is one of the greatest fast bowlers produces in this era. The South African is known not only for his wicket-taking abilities but also for stopping the run flow. The pacer has given us many unforgettable spells which have been remembered even today. Even in the shorter format of the game Dale Steyn has proven his prowess and has come handy with his killer pace and length.  Now on his birthday, let’s have a look back at five of his memorable performances in Test cricket. Dale Steyn Retires from Test Cricket: Virat Kohli, AB De Villiers and Others Congratulate ‘Pace Machine’ on an Incredible Career.

Dale Steyn showed his prowess against New Zealand at the Centurion. Steyn scalped five wickets conceding 47 runs. T pacer snapped a couple of wickets in the first innings and three more in the second innings.

Held at the Melbourne Cricket Ground in Australia Dale Steyn came in handy as he scalped five wickets in both innings. The pace battery claimed the wickets of players like Simon Katich, Brett Lee and others. With this South Africa won the game by nine wickets.

This was another game when Dale Steyn showed his killer bowling and with perfect line and length, got the wickets of Sachin Tendulkar, Subramaniam Badrinath, Harbhajan Singh, Amit Mishra. With this, he played a vital role in beating MS Dhoni-led Indian team by an inning and six runs. The match was held at Nagpur.

If you think that we have missed out on any of his best spells, please feel free to contribute in the Comments section. Coming back to the birthday of the South African pacer, LatestLY.com wishes him a Very Happy Birthday!

(The above story first appeared on LatestLY on Jun 27, 2020 07:45 AM IST. For more news and updates on politics, world, sports, entertainment and lifestyle, log on to our website latestly.com).