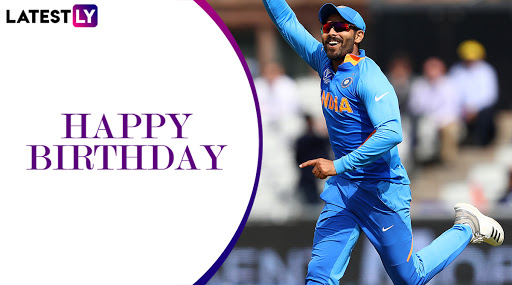 India’s flamboyant all-rounder Ravindra Jadeja will celebrate his 31st birthday on Friday (December 6). The left-arm spinner is an enigma and was described by Shane Warne as a ‘rock-star’ during the inaugural edition of the IPL. Jadeja was part of the India Under-19 team that won the World Cup in Malaysia in 2008 under the leadership of current captain Virat Kohli. The all-rounder has become one of the most vital components of the Indian team in the recent past and has cemented his place in both ODI's as well as the Test squad. On the occasion of Jadeja’s birthday, we look at some lesser-known facts about him.

Jadeja started his cricketing career with Saurashtra in the 2006-07 Ranji Trophy season and at a tender age of 17 was selected in the Indian squad for the 2006 U19 World Cup in Sri Lanka. His performances helped India to reach the finals where they eventually lost to Pakistan in a low-scoring encounter but Jadeja impressed. In 2008 he won the under19 World Cup which was held in Malaysia under the captaincy of Virat Kohli. The all-rounder came into limelight during the 2008-09 Ranji Trophy season where he took 49 wickets and scored 739 runs and as a result, was selected for the series against Sri Lanka in 2009 where he made his debut. His Test debut came almost four years later, on December 13, 2012 against England at Nagpur.

The enigmatic all-rounder has been an important member in the rise of Indian cricket in recent times and is considered as one of the best all-rounders of all time. On January 22, 2017, he became the first Indian left-arm spinner to take 150 ODI wickets when he dismissed Sam Billings in Kolkata. Later that year, Jadeja became the top-ranked bowler in the world leaving behind Ravichandran Ashwin who held that position for a long time. Here are some lesser-known facts about the rock-star of Indian cricket