Before the start of India's first T20I against Ireland in Malahide, there was great buzz and excitement on social media over tearaway Jammu pacer Umran Malik receiving his international cap from senior pacer Bhuvneshwar Kumar. 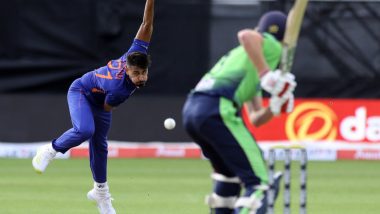 Dublin, June 27: Before the start of India's first T20I against Ireland in Malahide, there was great buzz and excitement on social media over tearaway Jammu pacer Umran Malik receiving his international cap from senior pacer Bhuvneshwar Kumar. After a delay of nearly two hours, with the match reduced to 12 overs a side, Malik got just one over to bowl, leaking 18 runs as Harry Tector punched him through mid-on for four and pulled him for a six over deep square leg. India skipper Hardik Pandya had uplifting words to speak for Malik after India won by seven wickets. India vs Ireland, 1st T20I 2022: Skipper Hardik Pandya Backs Debutant Umran Malik.

"When you play for India for the first time, and the journey he has taken, it's important to give such a bowler and such a talent time. Whether it was a good day or a bad day is irrelevant. For him, just to play for India is itself a very big thing, and that is something which I'm very happy for, irrelevant of how the result went, good or bad, it's okay." "It's part and parcel of the game. But at the same point of time, from here he'll only get better, the more matches he plays, and it's a very big thing for him to play for India, for anyone to play for India. I want to kind of let him enjoy this moment because it doesn't come every time. A debut happens only once," said Pandya in the post-match press conference.

With Malik, Deepak Hooda and Suryakumar Yadav getting some game time through the first T20I, Pandya stressed that India are always focused on getting better with every match in the run-up to the Men's T20 World Cup in October-November in Australia. "It's early, but yes our ultimate goal will be to get better for the World Cup itself. The whole management and all the boys who are not here as well, our goal is to make sure how can we get better for World Cup. This is one good step we've taken where intentionally our attitude and the kind of character the players are showing, it's going to help us in the World Cup when the crunch game comes." Sri Lanka Cricket Set To Give Fitting Salute to Late Spin Wizard Shane Warne.

Pandya signed off by stating that players will be given ample chances to present their case for World Cup selection, giving team management time to zero in on the final squad for the mega event. "You get experience while playing, so that has been a constant effort by the management and the guys they're looking forward, to make sure they're there in the World Cup squad or in the scheme of things." "They want to give them the best opportunity to get a couple of games under their belt, rather than just coming towards the World Cup and getting their first game. So we want people to kind of settle in. I'm sure by the time the World Cup comes, we're going to get to a tighter squad which will play the tournament."

(The above story first appeared on LatestLY on Jun 27, 2022 03:09 PM IST. For more news and updates on politics, world, sports, entertainment and lifestyle, log on to our website latestly.com).