Sri Lanka Cricket (SLC) is set to give a fitting salute to late spin wizard Shane Warne when the opening Test against Australia gets underway at the Galle International Stadium on June 29. 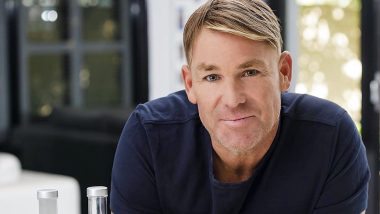 Galle, June 27 : Sri Lanka Cricket (SLC) is set to give a fitting salute to late spin wizard Shane Warne when the opening Test against Australia gets underway at the Galle International Stadium on June 29. Warne died at the age of 52 due to a suspected heart attack on March 4 this year while holidaying in Thailand. SLC's gesture is one of recognising Warne as a true friend of Sri Lanka who came to the country's aid during the 2004 tsunami devastation by flying over and visiting affected areas and making generous donations especially to homeless cricketers' families. SL vs AUS, 1st Test 2022: Steve Smith Clears Fitness Test; Mitchell Starc, Travis Head Still Fighting To Get Fit.

"He did voice that he was concerned about the welfare of Sri Lankans affected and as much saddened by the devastation of the Galle Stadium," a report on SLC's website said on Monday. Galle was the venue where the Australian great became the first bowler in Test history to take 500 wickets. This June 29 will evoke memories of Warne who "proved to be a true friend to his adversaries off the field in time of distress", said SLC. SLC along with the country's ministries of tourism and sport have reportedly invited Warne's family members for the opening Test and, a report recently said that they have given their consent to attend. Both the Tests will be played in Galle -- June 29-July 3 and July 8-12 -- and Sri Lanka's tourism minister Harin Fernando said the CEO of Cricket Australia (CA) has confirmed that Warne's family members will be attending the match.

(The above story first appeared on LatestLY on Jun 27, 2022 02:51 PM IST. For more news and updates on politics, world, sports, entertainment and lifestyle, log on to our website latestly.com).