The International Cricket Council today announced the schedule for the T20 World Cup which is supposed to happen in Australia. 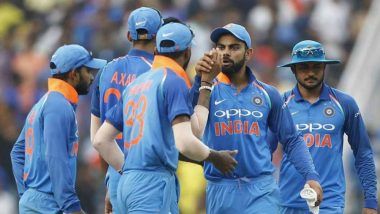 The International Cricket Council today announced the schedule for the T20 World Cup which is supposed to happen in Australia. The tournament will kick start from October 18 to November 15 and will feature many qualifying matches ahead of the Super 12 group stages on October 24. 12 teams have been divided into two groups i.e. Group 1 and Group 2. The Indians are placed in Group 2 along with England, South Africa and Afghanistan and the two other qualifiers. Check out the PDF timetable of the Men's, T20 World Cup 2020 which has the details of the match timings in IST, venue details and fixture dates of the tournament. Here's how you can download ICC Men's T20 World Cup 2020 Schedule Timetable in PDF for free online.

Hosts Australia is placed with Pakistan, West Indies, New Zealand and a couple of other qualifiers in Group A. India will play their first game against South Africa on October 24, 2019, at Perth. ICC Chief Executive David Richardson is confident of the venues and is expecting a great show. Whenever we host an event in Australia we know we can guarantee the one billion cricket fans around the world a great show," ICC chief executive David Richardson said. Check out the schedule below: Men's T20 World Cup 2020: Virat Kohli and Company Face First T20 Match Against South Africa.

The ICC CEO also was quite excited while unveiling the schedule of the Men’s T20 World Cup. "Outstanding venues. Noisy, passionate, knowledgeable fans. Exciting cricket. This is the perfect combination for a T20 World Cup." "To hold two T20 World Cup finals at the world's largest cricket stadium in front of 92,000 people with hundreds of millions more watching around the world is a particularly exciting prospect," Richardson added

(The above story first appeared on LatestLY on Jan 29, 2019 01:17 PM IST. For more news and updates on politics, world, sports, entertainment and lifestyle, log on to our website latestly.com).