With the victory, England took a 2-1 lead in the five-match series. The first six overs turned out to be the difference in the match. India could make just 24 for three in the powerplay stage whereas England cruised to 57/1 thanks to Buttler's strokeplay. 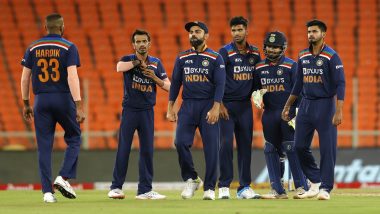 Ahmedabad, March 16: England bowlers' early strikes and tight bowling in the initial phase of the Indian innings followed by opener Jos Buttler's unbeaten 83 led their team to a crushing eight-wicket win in the third T20 International at the Narendra Modi Stadium here on Tuesday. With the victory, England took a 2-1 lead in the five-match series. The first six overs turned out to be the difference in the match. India could make just 24 for three in the powerplay stage whereas England cruised to 57/1 thanks to Buttler's strokeplay.

Chasing a 157-run target, England began well raising 23 for the first wicket before Jason Roy (9 off 13) was dismissed. However, Buttler (83 off 52 balls, 5x4s, 4x6s) kept up the charge as England took 14 off Chahal's first over -- the innings' fourth -- and followed it up with 16 runs in the fifth over of the innings bowled by Shardul Thakur. India vs England 3rd T20I 2021 Stat Highlights: Jos Buttler Shines As Visitors Defeat India And Take Lead in the Series.

Buttler's partner, Dawid Malan who is also a big-hitter, played second fiddle and kept rotating the strike before he was out stumped off the bowling of Washington Sundar. Jonny Bairstow (40 not out off 28 balls) then added an unbeaten 77 runs for the third wicket to see England home. Earlier, skipper Virat Kohli had hammered an unbeaten 77 (46 balls, 8x4s, 4x6s) to help India reach 156/6 in 20 overs.

Kohli played a captain's knock once again, following the unbeaten and match-winning 73 he made in the second T20I, as wickets around him kept falling. India had been reduced to 24 for three in the sixth over with K.L. Rahul, Rohit Sharma and Ishan Kishan back in the pavilion. Jofra Archer (0/32), Mark Wood (3/31), Adil Rashid (0/26) and Chris Jordan (2/35) bowled in the power-play and made things difficult for India.

The India captain added 40 runs with Rishabh Pant for the fourth wicket in just under six overs to bring India's innings back on track. Pant was run out and Shreyas Iyer followed soon after. But Kohli added 70 runs for the sixth wicket with Hardik Pandya (17 off 15 balls), who surprisingly played second fiddle.

India would have been in a poor position had they not managed quick runs in the slog overs. They made 69 in the last five overs with majority of those runs coming off Kohli's bat. Kohli though had a blip in the field when he dropped Buttler in the 15th over but by that time Buttler had already made 76. Yuzvendra Chahal too spilled a catch.

(The above story first appeared on LatestLY on Mar 16, 2021 11:25 PM IST. For more news and updates on politics, world, sports, entertainment and lifestyle, log on to our website latestly.com).