Joe Root and Jonny Bairstow scored impressive hundreds as England made light work of a 378-run chase. With this result, the series ended in a 2-2 draw. 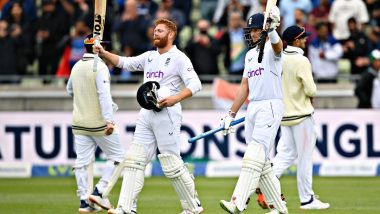 What a win this is. Certainly one, that would be remembered for a very long time in English cricket. Needing to score a whopping 378 to level the series, England batters gave a demonstration of what BazBall truly meant as they knocked over the runs in a pretty comfortable fashion, registering their highest-ever run chase in Test cricket. Also, this was the eighth-highest run chase in Test history. And the protagonists? Well, it has to be Joe Root and Jonny Bairstow, both of whom struck impressive hundreds to make light work of the run chase within the first session on Day 5. List of Highest Successful Run Chases in Tests: Check Top 10 Record Targets Achieved by Teams

India also lost for the first time, defending a total of more than 350 runs in a Test match. A year has certainly made the difference for India as well, who seemed to lack the sting and the extra stride in their step, something that had fetched them two wins in the series last year. Needing just 119 runs to wrap up the epic chase, England did so pretty easily, much like how they have been batting in the fourth innings of late. They found the gaps with ease and hit the occasional boundaries. Besides, the much-famed Indian bowling attack did not show up when it was needed, with only skipper Jasprit Bumrah (2/74) amongst the wickets. Root got to his ninth century while Bairstow crossed three figures for the second time in this game and England levelled the series in style, walking away with the accolades at Edgbaston.

Credit for this English victory also should be given to the century-opening stand between Alex Lees and Zak Crawley, both of whom set the foundation for this amazing victory that is a testament to English cricket growing as a force to be reckoned with, in Test cricket. On the flip side of the story, India looked rather hapless on the field and barring that little phase before and after tea on Day 4, they really did not have much to boast about in the fourth innings, with a below-par bowling effort and sloppy fielding hindering their chances of defending the total. Make no mistake, 378 was a pretty impressive total and on any other day, it would have made life a living hell for a side who would have been tasked with chasing down the total in the fourth innings of a Test match. But it was a new England team, nothing like the one that lost two games in this series a year ago, that was on strike and truly, they hit this delivery out for a massive six. What is BazBall? Know All About England’s New Approach to Test Cricket Under Coach Brendon McCullum

#This was also the highest run-chase by a team against India.

#This is also the eighth-highest chase in Test history and second-highest on English soil.

#India lost a Test for the first time after scoring 400+ in the first innings.

#It was the first time that India lost while defending a target in excess of 350.

With the rescheduled Test now done and dusted, England and India are set to resume their rivalry in the limited-overs series, which begins with three T20Is. The first T20I would get underway on July 7 at The Ageas Bowl in Hampshire.

(The above story first appeared on LatestLY on Jul 05, 2022 05:33 PM IST. For more news and updates on politics, world, sports, entertainment and lifestyle, log on to our website latestly.com).