The wicketkeeper-batsman was dismissed cheaply for just four runs early on the third day as India eventually were bundled out for 217 runs. 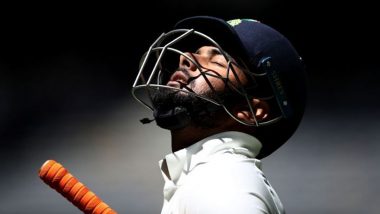 Former India legendary batsman VVS Laxman on Sunday called for patience and discipline from wicketkeeper-batsman Rishabh Pant after his poor performance during India's first innings in the World Test Championship final in Southampton. Pant who came out to bat after captain Virat Kohli's dismissal, scored only four runs off 22 balls before edging a wide ball to the slips to hand Kyle Jamieson his third wicket. India eventually were bowled out for 217 runs, with Jamieson being the best bowler with figures of 5/31. Sports News | WTC Final, Day 3: Jamieson Scalps 5 as India Bowled out for 217

“We were aware of the challenge that Rishabh Pant is going to face. He is a naturally aggressive batsman. On this kind of surface, you have to mix caution with aggression. You have to know what are areas you can target the bowlers. You have to show patience and discipline," Laxman said, during a show at lunch. “Unfortunately, on this surface, you cannot free your arms like the way you can do in sub-continent. But this is something you expect from Rishabh Pant," the former Indian middle-order batsman added.

Laxman also said that the situation was perfect for someone like Pant to come out and dominate the match. "I think this was the ideal situation for Rishabh Pant to stamp his authority like the way he did in Australia. Because these are different conditions than the conditions in Australia. You have to respect the good ball, especially when you know the bowler is on top of you by swinging the ball and getting the lateral movement of the wicket."

India kept losing wickets at regular intervals and they never really got going. From being 205/7, they were shot out for 217 on the third day. Jamieson was the wrecker-in-chief as he used his height to terrific advantage, bagging his fifth five-wicket haul in eight Test matches. Earlier, skipper Kohli and vice-captain Ajinkya Rahane had showed signs of promise as the duo helped India end the second day in a relatively comfortable position at 140/3.

The 46-year old nonetheless hoped that Pant would learn from this mistake. "This is something I am sure, he will learn. When he was walking back after getting out, he was disappointed with himself. He was talking to himself, showing through action, that he had to leave that delivery," he said.

(The above story first appeared on LatestLY on Jun 20, 2021 08:30 PM IST. For more news and updates on politics, world, sports, entertainment and lifestyle, log on to our website latestly.com).