Shami, along with the Indian bowlers were on fire on the fifth day, reducing New Zealand to 131/5 by lunch. India had earlier scored 217 runs in their first innings. 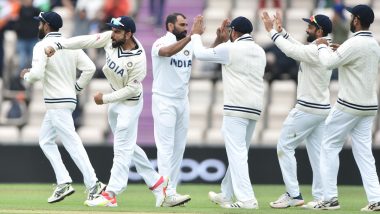 Indian batting legend VVS Laxman on Tuesday praised the Indian bowlers for their performance on the fourth day of the ongoing World Test Championship final against New Zealand. Indian bowlers turned up the heat with some fiery bowling, the highlight of which was Mohammad Shami disturbing the woodwork behind New Zealand's BJ Watling, to leave the Kiwis in a spot of bother at 131/5 at lunch. Earlier on the third day, they were hardly able to trouble the New Zealand batsmen with Tom Latham and Devon Conway adding 70 runs for the first wicket. Mohammad Shami Castles BJ Watling With a Stunning Delivery During IND vs NZ WTC Final, Watch Video

Singling out Shami for his performance, the former right-hander explained why he was able to be so effective, stating, "The other night, while he was unplayable and he looked good because the majority of times, the batsmen were getting beaten, but the wicket-taking delivery was missing. Whereas today, the fuller he bowled, he got the reward for change in that length. But also the intensity; he bowled a long spell but from the first ball till the last ball of the spell, the pace did not drop down. This means he worked on his fitness and the intensity was really great to see."

New Zealand had begun the day sitting on a comfortable 101/2. But two wickets by Shami and one by Ishant Sharma completely changed the complexion of the match by lunch. Earlier, the fourth day's play was washed out due to rain.

(The above story first appeared on LatestLY on Jun 22, 2021 08:22 PM IST. For more news and updates on politics, world, sports, entertainment and lifestyle, log on to our website latestly.com).