Rishabh Pant continued to deal in boundaries and sixes and went on to notch up his half-century of just 28 balls. Pant became the fastest Indian half-centurion in Test matches breaking Kapil Dev's record who scored his Test fifty of 30 balls. 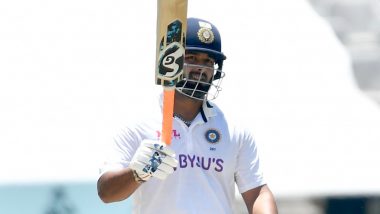 Visitors need 419 more runs to win as they scored 28/1 going into Stumps on Day 2 of the second Test being at the M Chinnaswamy Stadium. Resuming the post Dinner session at 199/5 the Indian team went past the 200-run mark. The duo of Shreyas Iyer and Ravindra Jadeja batted well to notch up the second half-century stand of the Indian innings. Shreyas Iyer carried on from where he left in the previous innings when he scored 92. Iyer went on to score his half-century making his second score of 50 plus in the match. IND vs SL 2nd Test 2022 Day 2: Sri Lanka 28/1 at Stumps in Chase of 447.

The 63-run partnership between Jadeja and Iyer was broken by left-arm medium-pacer Vishwa Fernando as he cleaned up southpaw Jadeja for 22.

Ravichandran Ashwin walked in to bat and along with Iyer took India's total beyond 250 and its lead beyond the 400-run mark. Sri Lankans struck consecutive blows to India as both Ashwin and Iyer were dismissed by Praveen Jayawickrama and Lasith Embuldeniya respectively. Ashwin got out for 13 while Iyer was dismissed for 67 to leave India at 278/8. Axar Patel and Mohammed Shami then came in and took the team's total beyond the 300-run mark. Embuldeniya then cleaned up Axar Patel for 9 as India declared the 2nd innings at 303 for 9 with Shami remaining unbeaten on 16. Hosts set visitors a mammoth 447-run target.

Chasing a mammoth 447-run target Lankans were dealt with an early blow as Jasprit Bumrah dismissed Lahiru Thirimanne's leg before wicket for a duck of the third ball of the innings. Skipper Dimuth Karunaratne and Kusal Mendis batted steadily to take the team's total to 28/1 at stumps on Day-2 needing 419 more runs to win the Test match. Check out some stats from day two: Rishabh Pant Scores Fastest 50 by an Indian in Test Cricket, Breaks Kapil Dev's Record.

# Shreyas Iyer became fourth batsman to score 50+ runs in both the innings of a Day-Night Test.

# Jasprit Bumrah’s figures of 5/24 are best for an Indian pacer v SL in Tests.

# Bumrah’s figures are also the third best for India in Day-Night Tests.

# This is Bumrah’s first five-wicket haul at home in Tests.

Earlier in the day Sri Lanka resumed day-2 at 86 for 6 but could add only 9 runs to the overnight score and lost the wicket of Lasith Embuldeniya caught behind to wicket-keeper Rishabh Pant of Jasprit Bumrah's bowling for 1 to put the visitors in further trouble at 95 for 7. The Lankans scratched their way to the triple-figure mark but immediately after reaching there they lost yet another wicket as Ravichandran Ashwin cleaned up Suranga Lakmal for 5 to leave them tottering at 100 for 8. Bumrah once again struck dismissing wicket-keeper batter Niroshan Dickwella for 21 caught behind by keeper Pant. Dickwella became Bumrah's fifth scalp of the innings as he went on to take his eighth five-wicket haul and his first on home soil.

Sri Lankans were bowled out for 109 giving India a 143-run lead as Ashwin dismissed Vishwa Fernando stumped by Pant for 8. Unlike the first innings, Indian openers started off steadily in the second innings as local lad Mayank Agarwal and skipper Rohit Sharma batted steadily to take the team's total to 42. Slow left-arm bowler Lasith Embuldeniya then broke the partnership dismissing Agarwal for 22 caught in the gully by Dhananjaya de Silva.

Hanuma Vihari joined his skipper in the middle to take their team's total beyond the 50-run mark as the hosts scored 61/1 going into Tea on day-2. Resuming the Post Tea session at 61/1 Hanuma Vihari and skipper Rohit Sharma batted steadily to notch up a fifty partnership. The 56-run partnership between Rohit-Vihari was broken by right-arm off-break bowler Dhananjaya de Silva as dismissed captain Rohit Sharma for 46 left India at 98/2.

Virat Kohli came in to bat with Vihari and the duo took India's second innings total to a triple-figure mark. At the score of 116 the hosts lost their third wicket as Praveen Jayawickrama cleaned up Vihari for 35. Rishabh Pant walked in to bat and the southpaw started in his trademark aggressive style hitting boundaries and sixes. But the small 23-run partnership was broken as Jayawickrama dismissed Virat Kohli's leg before the wicket and the star batter's disappointing run with the bat continued. India's top-run scorer in the previous innings Shreyas Iyer walked into bat with Pant and took India's second innings total beyond the 150-run mark.

The wicket-keeper batter continued to deal in boundaries and sixes and went on to notch up his half-century of just 28 balls. Pant became the fastest Indian half-centurion in Test matches breaking Kapil Dev's record who scored his Test fifty of 30 balls. Soon after scoring his half-century Pant was dismissed caught and bowled by Jayawickrama to leave India at 189/5. Ravindra Jadeja came into bat with Shreyas Iyer and the duo took India's total to 199 for 5 going into Dinner to extend the lead to 342 runs.

(The above story first appeared on LatestLY on Mar 13, 2022 10:33 PM IST. For more news and updates on politics, world, sports, entertainment and lifestyle, log on to our website latestly.com).