India is scheduled to take on Pakistan on August 28 in Asia Cup in their opening game. Sri Lanka will host the tournament amid a dreadful economic crisis. 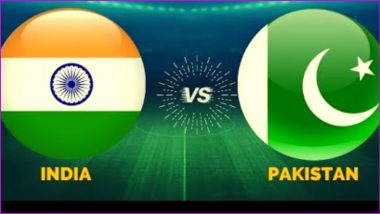 The Indian cricket team is scheduled to face their arch-rivals Pakistan as the two teams will meet in 2022 Asia Cup. The continental tournament, which is going to take place in Sri Lanka, will start from August 27 and the El Classiso of cricket, India vs Pakistan, is set to be played at August 28, reports suggest. After getting the green signal from the Indian Cricket Board, the Sri Lankan cricket board will be hosting the 2022 Asia Cup, starting from the last week of next month. And the cricket fans are lucky enough to witness the years-long rivalry once more in the cricket field. Sri Lanka Cricket Affirms Its Readiness To Host Asia Cup 2022: Report

India, Pakistan, Bangladesh, Sri Lanka and Afghanistan are the only teams who have already qualified for the tournament. However, other countries such as Nepal, Oman, UAE, and Hong Kong will have to seal a berth in the tournament through qualifiers. The media reports suggest that the qualifiers for 2022 Asia Cup will kick off from August 21, a week before the tournament starts. Asia Cup 2022 Schedule: Likely Men’s Asia Cup T20 Cricket Tournament Fixture Including India vs Pakistan

Rohit Sharma-led India will start the Asia Cup campaign by resuming their old rivalry with Pakistan as the Men in Blue will lock horns with their neighbours on August 28 and will thus start their title defense. In the last edition of the continental tournament, Indians beat Bangladesh in a thrilling final showdown to lift the Asian Cup. They would be looking to repeat those proceedings this time around also, starting against Pakistan.

SLC is going ahead with Asia Cup after getting the green light from India. They are drawn up with Afghanistan and Bangladesh. The high profile India versus Pakistan scheduled on the 28th August. Qualifiers will start on 21 Aug. Tournament proper from 27 Aug to 11 Sep. Exciting.😍

Babar Azam and Co. beat India by 10 wickets in the two team's last meeting in last year's T20 World Cup and would be looking to continue their winning momentum. However, it remains to be seen whether the tournament is taken place as scheduled or gets postponed as Sri Lanka is going through the worst economic crisis in their history.

(The above story first appeared on LatestLY on Jul 07, 2022 05:17 PM IST. For more news and updates on politics, world, sports, entertainment and lifestyle, log on to our website latestly.com).