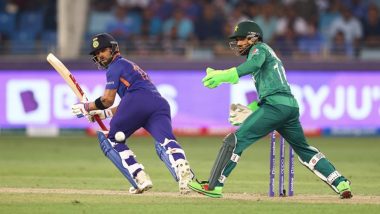 Asia Cup 2022 is scheduled to take place from August 27 to September 11 in Sri Lanka. The host nation was recently confirmed to be UAE after it was shifted out of Sri Lanka due to a severe economic crisis in the country. BCCI President Sourav Ganguly confirmed the change of venue for Asia Cup 2022 on Thursday. This year’s Asia Cup will be a six-team event as well but will be played in a T20 format given that ICC Men’s T20 World Cup 2022 is scheduled later in Australia. India, Pakistan, Sri Lanka, Bangladesh, and Afghanistan are confirmed participants. The sixth team will be determined after a qualifying tournament which will be played between UAE, Kuwait, Hong Kong and Singapore. The winner of the qualifying tournament will head to the tournament proper. The official schedule of Asia Cup 2022 is yet to be announced by the ACC (Asian Cricket Council), but we have tried to compile a likely schedule of the tournament. Please note, that it is based on the format used in 2018, which was the previous edition of the tournament. India Scheduled to Meet Rival Pakistan in Asia Cup 2022 on August 28: Report

The teams are likely to be divided into two groups. We believe, Group A will consist of traditional-rivals India and Pakistan apart from Afghanistan. Hosts Sri Lanka, previous edition runners-up Bangladesh and the qualifying team will comprise of Group B. Each team will play two group-stage matches and the two teams from each group will progress to Super-Four round then.

*Note: This is a likely schedule, not an official one.

After 2018, Asia Cup was supposed to be played in 2020, but the pandemic first pushed the event to 2021 before finally being moved to 2022. India come into the tournament as defending champions. The Men in Blue won the 2018 edition of the Asia Cup, which was held as a 50-over contest, by defeating Bangladesh. India apparently is the most successful team in the history of Asia Cup and have won seven titles.

(The above story first appeared on LatestLY on Jul 07, 2022 02:23 PM IST. For more news and updates on politics, world, sports, entertainment and lifestyle, log on to our website latestly.com).