India vs West Indies, 3rd T20I 2019: Virat Kohli vs Kesrick Williams & Other Exciting Mini Battles to Watch Out for in Mumbai

Rohit Sharma is just one big hit shy of becoming the first Indian batsman to complete 400 international sixes while Chahal needs one more wicket to become India’s highest wicket-taker in the shortest international format. For West Indies, Evin Lewis gave the side a good start in both the matches while Hayden Walsh and Sheldon Cottrell came good with the ball. 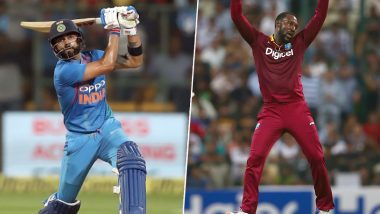 India vs West Indies T20I series is perfectly poised at 1-1 and the third and deciding encounter will be played on December 11 at the Wankhade Stadium in Mumbai. The two-match series has been a nail-bitter as India won the first match which was a high-scoring thriller while West Indies made an impeccable comeback in the second match and squared up the series. So, a lot will be in stakes in the third match and one can expect the clash to go down to the wire. Players like Virat Kohli, Lendl Simmons and KL Rahul have proved their mettle with the bat while Yuzvendra Chahal and Hayden Walsh have displayed a good show with the ball. A lot of individual battles are expected in the third clash and below we’ll look at some of them. India Vs West Indies, Cricket Score 3rd T20I Match.

Rohit Sharma is just one big hit shy of becoming the first Indian batsman to complete 400 international sixes while Chahal needs one more wicket to become India’s highest wicket-taker in the shortest international format. For West Indies, Evin Lewis gave the side a good start in both the matches while Hayden Walsh and Sheldon Cottrell came good with the ball. The Men in Blue certainly stepped into the series as favourites but the fans have witnessed an even contest between the two sides and it could be anyone’s series. Meanwhile, let’s look at some of the mini-battles between the batsmen and the bowlers which can be seen in Mumbai. Virat Kohli Catch Video: Indian Captain Takes a Stunner to Dismiss Shimron Hetmyer

Just like the series, the contest between these two players is also even and both will look to dominate each other in the third T20I. Kohli wreaked havoc in the opening match and smashed the pacer for fours and sixes. One really can’t his chequebook celebration. However, the Caribbean pacer took his revenge in the succeeding clash by dismissing the Indian skipper for 19 runs. So, let’s see, who wins the final round of this rivalry.

Chahal will be eyeing a huge milestone in the third T20I but he’ll certainly have to face the Hetmyer challenge. Hetmyer has been in great striking form and will be roaring to make a mark in the flat-deck of Mumbai. The leg-spinner did take his wicket in the first match but not before the southpaw registered his maiden T20I fifty. Chahal generally comes to bowl in the middle and that’s exactly where the southpaw is likely to come in. Now, it will be interesting to see whether the Caribbean striker will rain boundaries or Chahal will fox him.

The Indian wicket-keeper managed to end his poor run with a 22-ball 33 in the second T20I and will eye to put up an even better show in the decider. He is particularly good against the spinners and his ability to get under the ball helps him to hit the ball a long way. However, the visiting side have Hayden Walsh in their dug-out, who can quick in the air being the leg-spinner and doesn’t tend to give much room to the batsman. It could well be possible that Pant might have to face him straight away and both will seek to outplay each other.

West Indies are the defending World T20 champions and have managed to put up a good against the Men in Blue in their own den. However, India have a good record in the deciding encounters and will back themselves to win the upcoming clash too. The Mumbai pitch has generally favoured the batsmen. So, one can expect a run-feast in the third T20I and it certainly could be anyone’s game.

(The above story first appeared on LatestLY on Dec 10, 2019 12:27 PM IST. For more news and updates on politics, world, sports, entertainment and lifestyle, log on to our website latestly.com).