Kolkata Knight Riders (KKR) allrounder Andre Russell's blistering half-century (54 off 22 balls) against Chennai Super Kings (CSK) in the Indian Premier League (IPL) may not have won his team the match, but his fans were overjoyed with his performance. 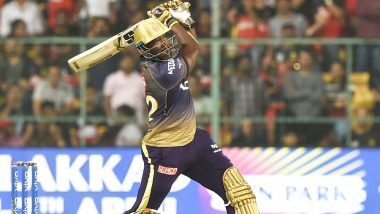 Mumbai, April 23: Kolkata Knight Riders (KKR) allrounder Andre Russell's blistering half-century (54 off 22 balls) against Chennai Super Kings (CSK) in the Indian Premier League (IPL) may not have won his team the match, but his fans were overjoyed with his performance.

In a high-scoring match on Wednesday, CSK slammed 220 for 3 and thanks to Russell's quick-fire 54, KKR breached the 200-run mark, losing by 18 runs. The West Indian struck three boundaries and six massive hits over the fence to take the team closer to the target. RR vs KKR IPL 2021 Dream11 Team Selection: Recommended Players As Captain and Vice-Captain, Probable Lineup To Pick Your Fantasy XI.

Don’t switch off your tv untill Russel is there @Russell12A

Before the match, Russell was 'heartbroken' with a string of poor scores in the three previous matches, where his highest was 31. But the counter-attacking half-century brought him back in his elements, and the social media loved Wankhede fireworks.

When former India pace bowler, Irfan Pathan, tweeted, "Don't switch off your TV until Russ is there," the West Indian responded, "Once I'm there, you know everything is possible. Yeah, I've done it before a lot of times. So fans can know that listen, no doubt even when it's 100 runs in 20 balls, there's always a possibility of 20 sixes; who knows?"

Russell said he remained positive all through despite three poor scores. "In difficult times, you have to stay positive; you have to stay strong. Exercise, stay on the positive side and know that nothing lasts forever. The bad phase, the struggles -- they don't last forever. You go through it with a positive stance. You prepare for the greatness ahead."

And when KKR skipper Eoin Morgan said at a post-match interview that he prefers to 'stay away from Russell' after he gets out cheaply, the 32-year-old West Indian said, "Well, when you get out, and you know the job is not done, you tend to be angry and the HULK can come out. Last night was different. I was very emotional and disappointed. I wanted to take it home so badly. I was heartbroken."

Another fan Tweeted, "Love you 3000 times." And Russell's response was a smashing hit. "To all my KKR fans out there, I love you 3 million times. Love all the way. We bleed purple, alright?"

(The above story first appeared on LatestLY on Apr 23, 2021 06:57 PM IST. For more news and updates on politics, world, sports, entertainment and lifestyle, log on to our website latestly.com).