The suspense around Delhi Capitals opener Prithvi Shaw's availability for the last two league matches of IPL 2022 has increased with assistant coach Shane Watson hinting that the youngster is unlikely to feature in the side's remaining matches against Punjab Kings and Mumbai Indians. 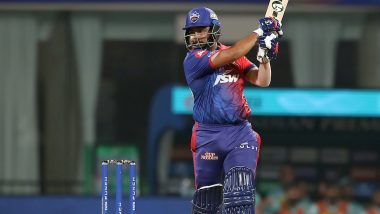 Mumbai, May 13: The suspense around Delhi Capitals opener Prithvi Shaw's availability for the last two league matches of IPL 2022 has increased with assistant coach Shane Watson hinting that the youngster is unlikely to feature in the side's remaining matches against Punjab Kings and Mumbai Indians. Shaw has not featured in DC's last three league matches against Sunrisers Hyderabad, Chennai Super Kings and Rajasthan Royals after playing against Lucknow Super Giants on May 1. An Instagram story from Shaw on May 8 showed that the opener was admitted to a hospital due to fever. IPL 2022: Pat Cummins Leaves Kolkata Knight Riders Early Due to Hip Injury, Says Report.

"I don't know his diagnosis exactly. But he has just had this underlying fever for the previous couple of weeks, which they've had to really get to the bottom of it to find out exactly what it was. "It's not looking great for him to be available for the last couple of games, which is a big shame because he is an incredibly skilful young batter taking the best bowlers in the world down a lot of the time," said Watson in an episode of the Grade Cricketer on Thursday. In nine matches, Shaw had scored 259 runs in nine matches at an average of 28.78 and strike rate of 159.87, including two half-centuries. "It's a big loss for us to not have him. The last couple of weeks he has been under the weather. Hopefully, he gets back to full health soon, but unfortunately, it's not going to be in time for the minimum of last two games that we've got," added Watson. KKR vs SRH Preview: Likely Playing XIs, Key Battles, Head to Head and Other Things You Need To Know About TATA IPL 2022 Match 61.

Earlier, in an interview during Delhi's eight-wicket win over Rajasthan Royals, head coach Ricky Ponting was heard saying that 'Prithvi has been ruled out now', without giving clarity on the time period of Shaw's unavailability. In the post-match presentation ceremony, captain Rishabh Pant didn't say much on Shaw's availability in the league stage. "We miss him (Shaw), but at the same time that is something we cannot control. He got typhoid or something like that because the doctor told me that. Hopefully, he will be back. We don't know yet. If he is back it's going to be a good addition for us." Delhi are currently at fifth place in the points table with 12 points from as many matches and will face Punjab on Monday at the DY Patil Stadium to strengthen their chances of entering the playoffs.

(The above story first appeared on LatestLY on May 13, 2022 02:52 PM IST. For more news and updates on politics, world, sports, entertainment and lifestyle, log on to our website latestly.com).