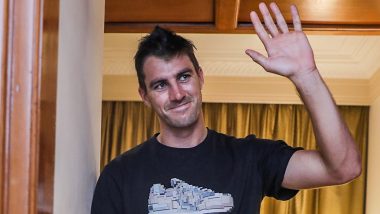 Mumbai, May 13 : Kolkata Knight Riders' right-arm pacer Pat Cummins has left the 2022 edition of the Indian Premier League (IPL) with a minor hip injury, says a report by cricket.com.au. The report added that Cummins, Australia's Test captain, is now headed to reach his home in Sydney to recover from the injury and be fit in time for an all-format tour to Sri Lanka next month. "Cummins had been managing the niggle through the IPL but, with Kolkata only having an outside chance of making the playoffs, he will complete his rehabilitation at home before flying out for the ODI and Test legs of next month's Sri Lanka tour," said the report. Brendon McCullum Reacts After Being Appointed As England Coach, Says 'It’s Been an Emotional Couple of Days'.

In IPL 2022, Cummins featured in five matches for Kolkata, where he set the tournament alight with a record 14-ball half-century to be unbeaten on 56 against Mumbai Indians in Pune after recording figures of 2/49. But poor showings with the ball meant Cummins didn't turn out for Kolkata till the return match against Mumbai came on Monday, picking 3/22 in a 52-run win. Overall, Cummins picked seven wickets in five matches of IPL 2022, at an economy rate of 10.68 while averaging 30.28. "Cummins' recovery is only expected to take a fortnight. It had already been announced he would miss the three T20 Internationals that begin the six-week long tour of Sri Lanka," further said the report. IPL 2022: Umran Malik’s Father Hopes His Son Plays for India and Performs Well.

Cummins had entered IPL 2022 on the back of leading Australia to a historic 1-0 Test series win in Pakistan. In the third and final Test at Lahore, Cummins picked figures of 5/56 and 3/23 in Lahore to play a crucial hand in Australia winning the match by 115 runs and emerge victorious in the series. Kolkata's next match in IPL 2022 will be against Sunrisers Hyderabad at the MCA Stadium in Pune on Saturday.

(The above story first appeared on LatestLY on May 13, 2022 01:43 PM IST. For more news and updates on politics, world, sports, entertainment and lifestyle, log on to our website latestly.com).