Jasprit Bumrah’s Success Down to ‘Following the Best Processes’

Mumbai Indians pace bowler Jasprit Bumrah has revealed that his success for India and his franchise in the Indian Premier League, Mumbai Indians, is down to "following the best processes" and not "looking at outcomes". 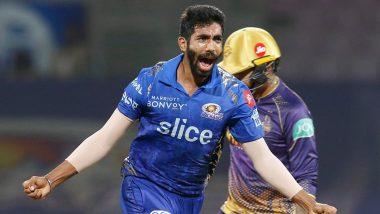 Mumbai, May 10: Mumbai Indians pace bowler Jasprit Bumrah has revealed that his success for India and his franchise in the Indian Premier League, Mumbai Indians, is down to "following the best processes" and not "looking at outcomes". The 28-year-old Bumrah on Monday had the best bowling figures in IPL 2022 so far, taking five wickets for 10 runs in his four overs. But his big-hearted effort was not enough as the Rohit Sharma-led Mumbai Indians still ended up losing the match against Kolkata Knight Riders by 52 runs. MI vs KKR, IPL 2022: Jasprit Bumrah Was Special but Disappointed With Batting, Says Rohit Sharma.

Bumrah grabbed the wickets of the well-set Nitish Rana (43), Andre Russell (9), Sheldon Jackson (5), Pat Cummins (0) and Sunil Narine (0) to restrict two-time IPL champions KKR to 165/9. But inept batting let Mumbai down yet again as the five-time champions could manage just 113. The 'Player of the Match' award was some consolation for Bumrah, who admitted that a win would have made him even happier.

"It's always a good feeling to contribute but the important thing is for the team to win. We had our chances but could not get it done. My aim has always been to stick to my processes and I like to contribute in whatever way I can," said Bumrah. He also stressed on the point of following the best processes and not only looking at outcomes. "I always do my evaluation by myself, I look to follow my own processes and not pay attention to what the outside world is saying. I have been in great rhythm in this tournament. You cannot control the end result, you can only follow your processes best and I accept whatever results come up after," he said. IPL 2022: Jasprit Bumrah’s Five-for, KL Rahul’s Batting Exploits Re-Ignite Hope of T20 World Cup Success.

"You cannot judge anyone by stats or end results. There are a lot of factors involved - like the game state, onset of dew, the risks taken at different times -- which come into play." The bowler also felt that Mumbai Indians' young squad was still finding its feet. "We have not been able to close out games despite having opportunities. Ours is a young team, who are still getting better and trying to understand their game. We have always been competitive and are just looking for some complete performances. It will be our aim to get that ideal performance in the remaining games," he added. Mumbai Indians will play Chennai Super Kings on May 12.

(The above story first appeared on LatestLY on May 10, 2022 12:24 PM IST. For more news and updates on politics, world, sports, entertainment and lifestyle, log on to our website latestly.com).