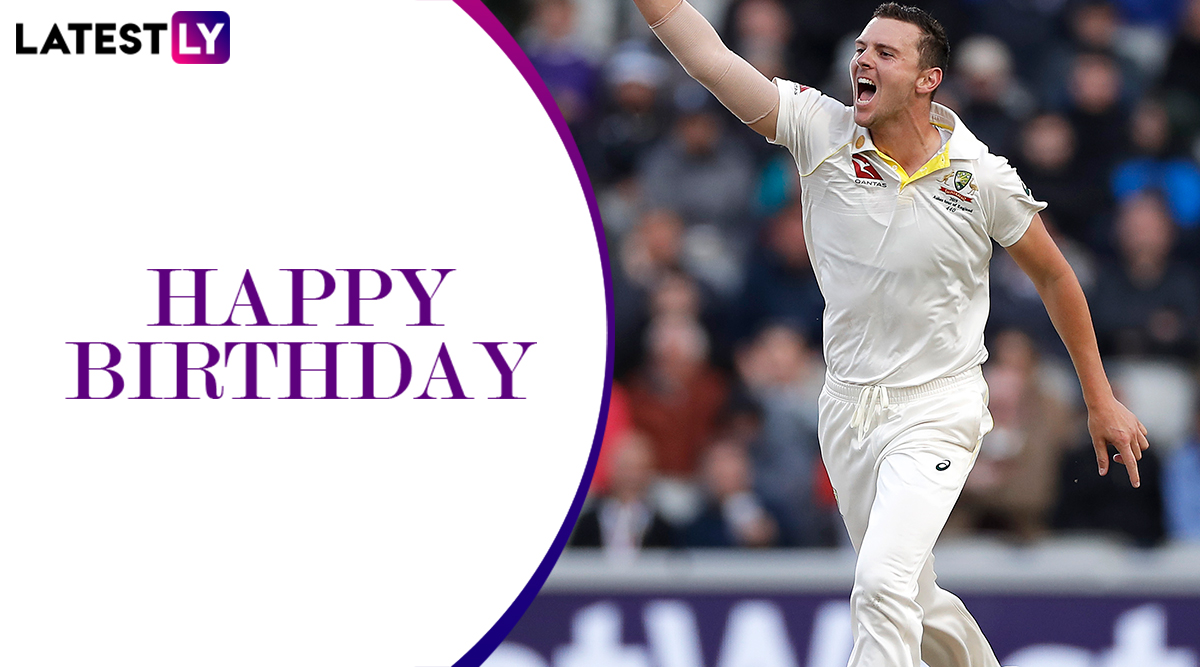 Star Australian pacer Josh Hazlewood turns 29 on Wednesday. Born on January 8, 1991, the right-arm fast bowler is a vital cog in the current Australian pace attack and has played a crucial role in his side's recent success in red-ball cricket. Unlike his teammates like Mitchell Starc and Pat Cummins, Hazlewood is not someone who bowls at a ferocious pace but instead depends upon his swing to get the better of the batsmen. Many also consider Hazlewood as the successor of the legendary Glenn McGrath and the former has certainly justified the tag given to him. India vs Australia ODI Series 2020 Schedule in IST, Free PDF Download.

Making his international debut in 2010, the pacer didn't get off to a great start and was dropped immediately after his maiden ODI series against England. However, Hazlewood made a comeback in 2013 and since then there was no looking back. He delivered constantly and proved his mettle in all three formats. So far, the pacer has scalped 195, 72 and 8 wickets in 51 Tests, 44 ODIs and 7 T20Is respectively. These stats are certainly impressive but could have been even greater if the pacer wouldn't have suffered multiple injuries. Meanwhile, let's look at some of the best spells bowled by the Aussie speedster.

5/68 Against India in Brisbane

The right-arm pacer wreaked havoc on his Test debut and ran through the potent Indian batting line-up. In the second Test of India’s 2014-15 Tour of Australia, Hazlewood got his baggy green and he announced himself in style. He bowled with hostility and bagged a five-fer in the first innings of the match. His brilliance restricted India to 408 runs in the first innings and later, the hosts won the match by four wickets.

The third Test of New Zealand’s 2015 Tour of Australia was the first-ever Day-Night Test in which Hazlewood become the first bowler to take an international wicket with a pink-ball. The pacer looked in rhythm throughout the match and gave the Black Caps a run for their money. He took three wickets in the first innings and bettered his tally by taking six wickets in the third innings. The visitors couldn’t succumb to Hazlewood’s pressure and lost the match by three wickets.

In the third Test of Ashes 2017-18, Hazlewood looked at his prime and played a crucial role in his guiding his side to victory. After scalping three wickets in the first innings of the match, the pacer delivered an even lethal spell in the third innings of the match and dismissed five batsmen. Dented by the pacer’s effort, the visitors were bundled out for 218 runs and eventually lost the match by an innings and 41 runs.

5/31 Against South Africa in Perth

Defending a mediocre total of 154 runs, the right-arm pacer bowled his heart out in the 2nd ODI of South Africa’s 2014 Tour of Australia. He dismissed the likes of Quinton de Kock, Faf du Plessis and Ab de Villiers and in order to restrict the Proteas. However, the speedster’s stellar spell went in vain as South Africa went over the line with three wickets in hand.

5/50 Against West Indies in Bridgetown

Another Hazlewood special was seen in the finals of the Tri-Nation Series in 2015. Defending a total of 270 runs on a decent batting track was certainly not a bread and butter task but Hazlewood rose to the occasion and bowled an inspired spell. He took wickets at regular intervals and never allowed the Men in Maroon to take an upper hand. The pacer went on to dismiss five batsmen and guided his side to a 58-run win.

The fast-bowler will be next seen in action during Australia’s upcoming tour of India. It will be Hazlewood’s first ODI match since 2018 and will to make a thumping comeback. Also, the ICC T20 World Cup 2020 will be played on Australian soil and the pacer will also eye a spot in the Aussies’ squad for the gala tournament too.