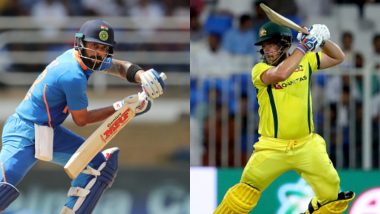 Soon after hosting Sri Lankan cricket team for three T20Is, India will host Australia for a three-match One-Day Internationals (ODIs). The Australian team’s visit will mark the end of India’s home season. Australia becomes the fifth team to tour India this season. South Africa, Bangladesh and West Indies earlier toured India. The three-match ODI series against Australia will begin on January 14 and ends of January 19. All three matches will be day-night encounters, with a start time of 02:00 PM IST. You can click here to download Australia tour of India 2020 full time table with fixtures in PDF format online for free. India vs Sri Lanka Series 2020 Schedule in IST, Free PDF Download: Get Fixtures, Time Table With Match Timings and Venue Details of Sri Lanka Tour of India.

India have named full-strength team for the ODI series with Virat Kohli as captain. Opening batsman Rohit Sharma, who has been rested for Sri Lanka T20Is, has been named in India’s squad. Left-handed opening batsman Shikhar Dhawan has been included in the squad as well. In Dhawan’s absence, KL Rahul was handed the opening responsibility and he did well. It will be interesting to see at which position Rahul will bat with Dhawan’s inclusion in the playing XI.

(The above story first appeared on LatestLY on Dec 28, 2019 06:18 PM IST. For more news and updates on politics, world, sports, entertainment and lifestyle, log on to our website latestly.com).