Of late, questions have been raised around England's white-ball skipper Eoin Morgan's future in the side due to an extended lean patch coupled with fitness concerns. 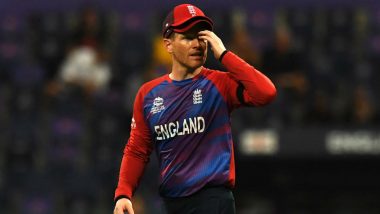 London, June 23: Of late, questions have been raised around England's white-ball skipper Eoin Morgan's future in the side due to an extended lean patch coupled with fitness concerns. Before the start of the ODI series against the Netherlands, Morgan reiterated his stance over leading England to a World Cup victory, with the Men's T20 World Cup to be held in Australia in October-November this year, followed by the defence of their 50-over title in India next year. India vs Leicestershire Practice Match: Young Virat Kohli Fan Spotted in Crowd, Shares Message for Indian Batting Star.

But against the Netherlands, Morgan got out for successive ducks of eight balls before sitting out of the final ODI at Amstelveen due to a tight groin. Morgan last scored a fifty in international cricket during the first ODI against Sri Lanka in July last year. Now, former England cricketer Mark Butcher has claimed that he would be astonished if Morgan, the left-handed batter, would attempt to play for England till the 2023 Men's Cricket World Cup.

"I can't see it, honestly, because Liam Livingstone needs to be on that side. And the strength of striking power around that squad just means there just isn't room for somebody just to be captain, doesn't matter how good that captain is," said Butcher on the Wisden Cricket Weekly Podcast. Though Morgan hasn't been scoring runs, he has found support from teammates like Jos Buttler, Liam Livingstone and Jason Roy as well as Test skipper Ben Stokes to get back into form. Stuart Broad and His Fiance Mollie King Announce Pregnancy.

"I would be staggered if he tries to make it through to the 2023 World Cup. That's not because of two ducks against the Netherlands. Frankly, who cares? That doesn't matter. I was surprised that he didn't announce that he was done with it after they won in 2019. We're now three years after that and he's still going." Morgan has been at the forefront of England's white-ball revolution and led them to win the 2019 Men's Cricket World Cup at home. "Look, he'll probably prove us all wrong, come back, great fitness and have an extraordinary run of form and lead the side in the next one, but at the moment that looks like a wild fantasy, doesn't it?" concluded Butcher.

(The above story first appeared on LatestLY on Jun 23, 2022 05:20 PM IST. For more news and updates on politics, world, sports, entertainment and lifestyle, log on to our website latestly.com).