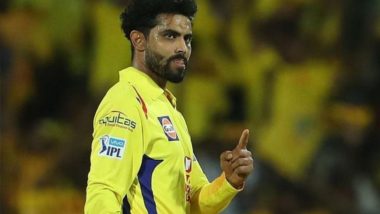 Ravindra Jadeja is just 73 runs from achieving this milestone during Mumbai Indians vs Chennai Super Kings, IPL 2020. The CSK all-rounder is just 73 runs away from reaching 2,000 run mark. With this, he would be the first all-rounder to have 2,000 runs scalping 100 wickets in the Indian Premier League. Jadeja has so far played for Rajasthan Royals, Kochi Tuskers Kerala and Gujarat Lions. As of now he has 1927 runs on his kitty and has scalped 108 wickets on the cash-rich league so far. His teammate Shane Watson stands on number two with 3575 runs, claiming 92 wickets so far. The Australian did not bowl a single ball in the IPL 2019. CSK IPL 2020 Schedule With Date & Timings in IST: Chennai Super Kings Matches of Indian Premier League 13 With Full Timetable, Fixtures in UAE.

Talking about Jadeja, he had been absent from the week-long camp conducted by the Chennai Super Kings in Chennai. Jadeja however, joined the team when they were leaving for UAE for IPL 2020 on August 21, 2020.  In the last edition of the Indian Premier League, the all-rounder scalped 15 wickets in 16 matches and bowled at an economy of 6.35. He bowled at a strike rate of 21.60 and remained one of the vital bowlers for the team. Considering the kind of a form that he has currently, it is very likely that he could achieve this feat in the next few matches itself.

The Chennai Super Kings will play their first game against the Mumbai Indians at the Dubai International Stadium.  This will be the opening game of the Indian Premier League 2020 on September 19, 2020. The cricket-starved fans are quite happy with the Indian players coming back into action.

(The above story first appeared on LatestLY on Sep 17, 2020 08:57 PM IST. For more news and updates on politics, world, sports, entertainment and lifestyle, log on to our website latestly.com).