Mohammed Siraj's father, Mohammed Ghouse, 53, lost his life on Friday after a brief illness. Siraj is currently in Australia with the Indian cricket team for a bilateral series, which begins with ODIs from November 27 onwards. 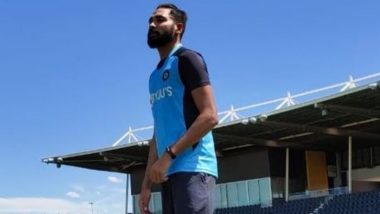 The Board of Control for Cricket in India (BCCI) in a statement has revealed that it had a discussion with Mohammed Siraj and he was offered the option of flying back and be with his family following the sad demise of his father Mohammed Ghouse. The 53-year-old lost his life on Friday after a brief illness. However, Siraj decided to stay with the national team which is currently in Australia preparing for the upcoming One-Day International (ODI) series against the home side. Mohammed Siraj Vows To Fulfil His Late Father’s Last Wish of Making India Proud, Says ‘I Lost the Biggest Support of My Life’.

“The fast bowler has decided to stay with the Indian contingent and continue performing his national duties. The BCCI shares his grief and will be supportive of Siraj in this extremely challenging phase. The BCCI requests the media to accord Siraj and his bereaved family members their space and privacy,” BCCI said in a statement.

Earlier in the day, BCCI President Sourav Ganguly praised Siraj for his character after the pacer decided to stay back in Australia despite losing his father. "May Mohammed Siraj have a lot of strength to overcome this loss..lots of good wishes for his success in this trip.. tremendous character," Ganguly had tweeted.

(The above story first appeared on LatestLY on Nov 21, 2020 07:54 PM IST. For more news and updates on politics, world, sports, entertainment and lifestyle, log on to our website latestly.com).