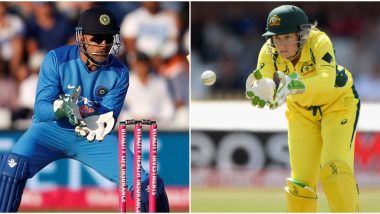 Alyssa Healy overtook MS Dhoni to become the wicketkeeper with most dismissals in T20I cricket. Healy achieved the feat when she caught Lauren Down off Georgia Wareham during Australia vs New Zealand women’s second T20I match at Brisbane. Healy, who had started the game on 90 dismissals, had equalled Dhoni’s record with a brilliant stumping of Amy Satterthwaite in the same innings before overtaking the former Indian wicketkeeper-batsman to set a new record in the books. Healy now has 92 dismissals in 114 matches for the Australia women’s team. Shane Watson Reveals His Grandmother Passed Away Days Before CSK vs DC Match in IPL 2020; Netizens Salute Chennai Super Kings Batsman for Playing Despite Personal Loss.

Her 92 dismissals is the most dismissals effected by a wicket-keeper in Twenty20 internationals across both men’s and women’s formats. Dhoni, who retired from international cricket this August, ended on 91 dismissals. Healy has taken 42 catches and effected 50 stumpings to reach the milestone. She is second in the record for the most number of stumpings in T20Is. Former England women’s cricketer Sarah Taylor, who retired last year holds the record with 51 stumpings to her name. Healy, however, needs only two more to overtake that record. Kings XI Punjab Pacer Sheldon Cottrell Salutes Fans Ahead of RR vs KXIP, Dream11 IPL 2020 Match (Watch Video).

Congrats to @ahealy77 who over takes MS Dhoni...yes guys this is true with the most dismissals by a wicketkeeper in T20 cricket!!

Meanwhile, Australia bundled New Zealand women for just 128 runs in the second T20I of a three-match series. The hosts already lead the series 1-0 after winning the first game by 17 runs and can clinch the series with a win in the second game. This is the first series played by both the Australia and New Zealand women’s teams since the ICC T20 World Cup in February. Australia women beat India by 85 runs to win their fifth T20 World Cup title.

(The above story first appeared on LatestLY on Sep 27, 2020 12:04 PM IST. For more news and updates on politics, world, sports, entertainment and lifestyle, log on to our website latestly.com).