The off-spinner surpassed these Indian greats to cross 50 Test wickets for the fourth time in his Test career. He had New Zealand on the mat with his wily bowling as India are in firm control of the game going into the fourth day. 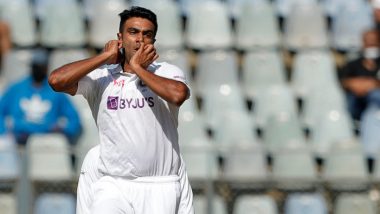 The ongoing second Test between India and New Zealand has seen spin bowlers rise to the party with Ajaz Patel first, claiming all ten wickets on a historic second day of the match and then Ravichandran Ashwin, breaking records and etching his name in history books. As India set New Zealand a mammoth 540-run target to chase down, Ashwin was the one to make early inroads into the Black Caps batting lineup, first dismissing stand-in skipper Tom Latham and then getting rid of Will Young. With Young's dismissal, his tally on Test wickets in 2021 reached 50. And with this, he became the first Indian spinner to take 50 or more wickets four times in Test cricket. India vs New Zealand 2nd Test 2021 Stat Highlights Day 3: Ajaz Patel & Mayank Agarwal Continue to Script Record as Hosts Look in Total Control

What makes this achievement even bigger is the fact that he surpassed the likes of Harbhajan Singh and also Anil Kumble, who achieved this feat thrice in their respective Test careers. The Tamil Nadu off-spinner earlier had taken 50+ Test wickets in 2015, 2016 and 2017. Singh had three wickets in 2001, 2002, 2008 while Kumble, who is India's leading wicket-taker in Test cricket, had done so in the years 1999, 2004, 2006. India vs New Zealand 2nd Test: Spidercam Stops Play During Day 3, Forces Early Tea in Mumbai

Ashwin, with figures of 3/27 on the third day of the second Test match, put India firmly on top. He can jolly well take a few more on the fourth day as India need just five wickets to win the match, defending 400 more runs. Earlier in the first Test in Kanpur, Ashwin surpasses Harbhajan Singh to become India's third-highest wicket-taker in the longest format of the game.

(The above story first appeared on LatestLY on Dec 05, 2021 08:16 PM IST. For more news and updates on politics, world, sports, entertainment and lifestyle, log on to our website latestly.com).