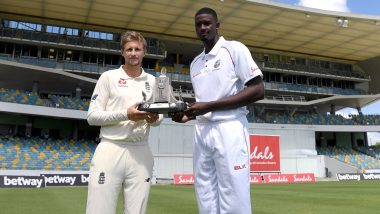 England and West Indies will fight for the Wisden Trophy one last time in the series decider as the prestigious trophy will retire after the conclusion of the ongoing Test series. The title will be replaced by Richards-Botham Trophy, commemorating the achievements of Sir Vivian Richards and Sir Ian Botham. The decision was collectively taken by the cricket board of both the nations in order to honour the two legends of the game. Botham and Richards are arguably the greatest cricketers to have played for England and West Indies respectively and their record is nothing less than sensational. England vs West Indies 3rd Test 2020: Ben Stokes vs Kemar Roach and Other Exciting Mini-Battles.

The Wisden Trophy, which was introduced in 1963, will now be kept at the MCC Museum at Lord's. Richards was overwhelmed by the gesture as he expressed his gratitude to ECB and WICB. “This is a huge honour for my good friend Ian and myself. I am delighted to know that the game that I have shown my love for since a little boy is naming such a prestigious award in my recognition of what I managed to achieve as a cricketer. When I had the opportunity to go to England and represent Somerset, one of the first persons I met was Ian Botham, who would later become of one of my best friends. We are friends for life,” said Botham during an interaction. England vs West Indies 2020: Ben Stokes Might Not Bowl in Third Test, Hints Joe Root.

The legendary West Indies batsman, who has 8540 runs 121 Test matches, also shed lights on his camaraderie with Botham. “To have this trophy – West Indies vs England – named in honour of our work on the cricket field is great. What I think is also remarkable is that it says a lot about our relationship off the field as well. We were competitors on the field, but we showed we were brothers off the field. I’m proud to have my name on one side of the trophy with him on the other side,” he added.

Botham also heaped praises on Richards and called the Caribbean legend his ‘most-treasured wicket.’ “Viv was the finest batsman I ever played against. He’s a great friend but we’ve always been competitive, not least when we were on the cricket field, and there was no one else’s wicket I would treasure more,” said the former England captain who has 5200 runs and 383 wickets in 102 Test matches.

“Playing the West Indies was always one of the toughest tests in cricket, and it’s an honour for this trophy to bear our names. I hope future series will be just as exciting as the one we’ve all been enjoying this summer,” added the all-rounder.

West Indies, who won the Test series in 2019, currently hold the Widen Trophy. However, the final and deciding encounter, which is set to be played in Manchester, will decide who’ll lift the honorary title for the last time.

(The above story first appeared on LatestLY on Jul 24, 2020 09:39 AM IST. For more news and updates on politics, world, sports, entertainment and lifestyle, log on to our website latestly.com).