England vs West Indies 3rd Test 2020: Ben Stokes vs Kemar Roach and Other Exciting Mini-Battles to Watch Out for in Manchester 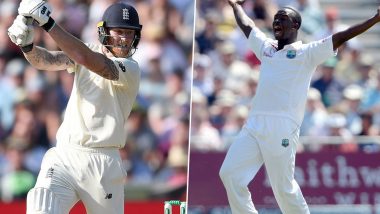 England and West Indies are all set to lock horns in the third and deciding encounter of the Test series. The match will be played at the Old Trafford in Manchester and will get underway on Friday (July 24). Some exciting contest between the bat and the red cherry was witnessed in the first two games of the series and with the stakes being so high in the forthcoming game, fans must brace themselves for a great game. Several mini-battles among the players are also expected to enhance the thrill of the match. Below, we’ll look at some of them. England vs West Indies, Manchester Weather, Pitch Report & Rain Forecast.

Speaking of the previous two games, Jason Holder and Co won the opening game of the series by four wickets and took a 1-0 lead. However, the home team made a brilliant comeback in the second game and settled the scores. Notably, the second match of the series took place at Manchester only. So, Joe Root’s men must be high on confidence to replicate their heroics while the visitors must do their homework to cause a turnaround. Now, let’s look at some mini-battles which one can see in Manchester. England vs West Indies Dream11 Team Prediction: Tips to Pick Best Team.

The England all-rounder is enjoying the form of his life and his all-round performance in the last game must still be haunting the Windies team. Also, Stokes has the knack of delivering in high-pressure games. Nevertheless, Kemar Roach, who delivered an impressive spell in the last match, will have the onus of sending Stokes back to the pavilion early in his innings.

Not many bowlers around the world have the luxury of calling Joe Root his bunny. However, Alzarri Joseph has. The right-arm pacer has dismissed Root four times in the latter’s last five innings against West Indies. Nevertheless, the England captain will not want to face another failure against the youngster and must be determined to play a stellar knock.

Blackwood has arguably been the best Caribbean batsman in the ongoing series. After scoring a match-winning 95 at Southampton, the right-handed batsman scored a resilient fifty in the fourth innings of the Manchester Test. However, he didn’t look quite comfortable while facing Stuart Broad. In fact, he fell prey to the veteran England pacer for a duck in the second innings of the previous game.

Meanwhile, rain is again expected to leave an impact in the upcoming game. Overcast conditions will be witnessed throughout the game and the match even under the threat of getting washed out. Hence, fans must keep their fingers crossed to enjoy a full-fledged game.

(The above story first appeared on LatestLY on Jul 23, 2020 01:39 PM IST. For more news and updates on politics, world, sports, entertainment and lifestyle, log on to our website latestly.com).