Rohit Sharma is currently in Guwahati along with the other member of the team for the first ODI between India and West Indies which begins on October 21, 2018. 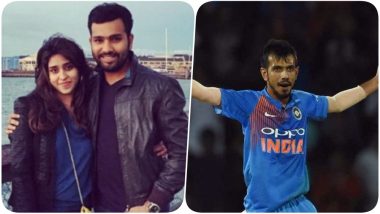 Rohit Sharma is currently in Guwahati along with the other member of the team for the first ODI between India and West Indies which begins on October 21, 2018. Amongst the members of the team is also Yuzvendra Chahal who happens to be quite a close friend of Rohit and his wife Ritika Sajdeh. Yuzi and Rohit have been teammates even for Mumbai Indians in the IPL and now the Indian team. Now, on the occasion of Dushhera, the Hitman took to social media to wish his fans and Yuzi also featured in the video.  Injured Shardul Thakur Ruled out of Windies ODIs.

Now below the video, in the Comments section, Yuzi addressed to Ritika and wrote, “Bhabhi see I am everywhere @ritssajdeh. Little did he know that Mrs Sharma had a very sassy reply up her sleeve for the spinner. She replied to the comment and said, “hahahhahah till the 25th. I suggest you keep Karva Chauth for him with me on the 27th.” The reply was so good that even Kuldeep Yadav could not stop laughing.  MS Dhoni, Virat Kohli & Others Hit the Nets at Guwahati Ahead of First India vs West Indies ODI Match (See Pics & Video).

Check out the snapshot below of the whole conversation.

Talking about the first ODI between India and West Indies, the team was spotted at the stadium sweating it out. The team reached Guwahati yesterday and received a warm welcome. Rishabh Pant is likely to make his debut in the match. Here is the squad for the Indian team:

(The above story first appeared on LatestLY on Oct 19, 2018 04:16 PM IST. For more news and updates on politics, world, sports, entertainment and lifestyle, log on to our website latestly.com).