The player in question had specifically requested for his wife to stay with him for more than the permissible period of 15 days but it was shot down by the Committee of Administrators (CoA). But the player, despite not being granted permission by CoA, had stayed with his wife for the entire seven-week duration of CWC2019. 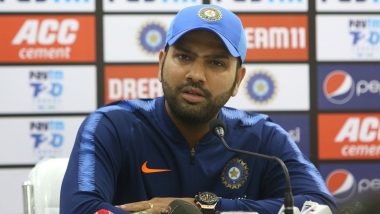 Reacting to reports that a senior Indian cricketer allegedly violated BCCI’s “family regulations” during the 2019 ICC Cricket World Cup, Rohit Sharma asked the media to keep families of cricketers out of any public discussions and requested for them (family members) not to be dragged into controversies. “You talk about me but don’t drag my family as they genuinely don’t care about anything else,” said the Indian limited-overs vice-captain when asked on the matter. Earlier reports quoting a senior Board of control for Cricket in India (BCCI) official had stated an Indian player, speculated to be one among the senior members in the Indian World Cup squad, had requested for his wife to be allowed to stay with for more than the 15-day period, which is rule put in place by the apex Indian cricket board. World Cup 2019: Senior Indian Cricketer Under Violated BCCI's 'Family Clause', Stayed With Wife For Entire CWC.

“Our families are there to support us, make us feel happy. When all these things were being written about, few of my friends came and told me and believe me or not, I was just laughing,” Sharma was quoted as saying to news agency PTI. Asking the media to not drag his family into these matters, the Indian deputy captain also added: “I think even Virat (Kohli) must have felt the same way as families are an important aspect of our lives.” Rohit Sharma Meets Budding Cricketers in Mumbai, Indian Opener Delighted to Interact With ‘Young Guns’ (See Post).

The player in question had specifically requested for his wife to stay with him for more than the permissible period of 15 days but it was shot down by the Committee of Administrators (CoA), which had laid down the rules, the news agency had earlier reported quoting a senior BCCI official who asked to keep anonymity.

But as per reports the player, despite not being granted permission by CoA, had stayed with his wife for the entire seven-week duration of CWC2019 before India’s exit from the elite tournament. The player had apparently done so without even informing the captain, coach or the team management.

"Yes, the same player in question, who was categorically denied permission during May 3 meeting, violated the 15-day rule during the World Cup,” the BCCI official had further added days after the World Cup. “The question that arises here is whether the player in question had sought permission about the extra duration of stay of his wife from the competent authorities -- in this case the coach and the captain. The answer is a 'No’.

Although the name of the involved Indian player had not been identified, names of some senior Indian cricketers, including Rohit Sharma and Virat Kohli, came up as speculations. Rohit, however, quashed all such reports and slammed the media for dragging his family. Meanwhile, the Hitman has been rested for the ongoing three-match T20I series against Sri Lanka and could be later seen in action against Australia.

(The above story first appeared on LatestLY on Jan 09, 2020 09:40 AM IST. For more news and updates on politics, world, sports, entertainment and lifestyle, log on to our website latestly.com).