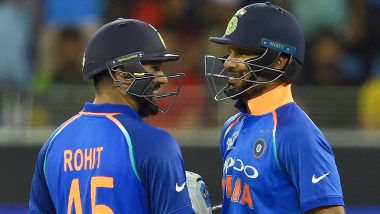 Veteran Indian opener Shikhar Dhawan has been proven a nightmare for many prominent bowling line-ups and his record in limited-overs cricket speaks for himself. Along with his batting prowess, however, the left-handed batsman is also known for his flamboyant personality and sense of humour. In fact, there are numerous hilarious stories on-field featuring the left-handed batsman. Recently, his opening partner Rohit Sharma also recalled one such incident. The Mumbai-born batsman revealed that during an ODI match against Bangladesh in 2015, the southpaw suddenly started singing while fielding in slips and the bowler – who was already halfway through his run-up – got scared. Rohit Sharma Reveals Why His Wife Ritika Cried After the Batsman Scored His Third Double Century in ODIs.

“We were playing in Bangladesh in 2015 as I was standing in the first slip and Shikhar Dhawan was in the third slip. Suddenly he started singing very loudly. The bowler was already in his run-up and the batsman, Tamim Iqbal, was left amazed. He didn’t understand where the noise was coming from. It might not sound as funny right now but when it happened on the field we couldn’t control our laughter, it was really funny,” Rohit said while talking to Shikhar Dhawan and Mayank Agarwal in a BCCI video.

When Jatt ji and Hitman are in conversation, expect nothing less than entertainment 😅😅😅

Episode 2 on Open nets with Mayank, coming up soon on https://t.co/uKFHYdKZLG pic.twitter.com/YSUuA2UmkF

After Rohit narrated the incidence, Dhawan said that his sense of humour is very ‘spontaneous.’ Previously, the left-handed batsman, 34, also opened up about his retirement plans and revealed that he wants to don the commentator’s hat. The veteran cricketer also said that he’ll be quite good at the job owing to his command over Hindi.

(The above story first appeared on LatestLY on Jun 06, 2020 02:25 PM IST. For more news and updates on politics, world, sports, entertainment and lifestyle, log on to our website latestly.com).