Sachin Tendulkar congratulates Mumbai Indians (MI) by a celebrating post on his social media account. MI defeated Delhi Capitals (DC) by five wickets to clinch record 5th IPL title. Mumbai chased down the target of 157 runs in 18.4, to become a champion second time in a row. Sachin Tendulkar was part of Mumbai Indians camp till IPL 2013. 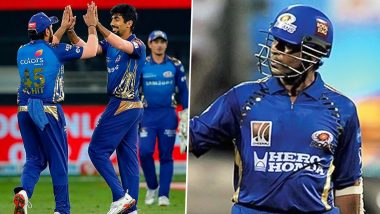 Sachin Tendulkar has played 78 IPL matches in which he has made 2334 runs with a strike rate of 119.82. Mumbai Indians after losing the toss did well to restrict Delhi Capitals to 156/7 in 20 overs. Trent Boult bowled well to dismiss Marcus Stoinis and Ajinkya Rahane. From Delhi side skipper Shreyas Iyer scored a half-century where he played a fine knock of unbeaten 65 runs from 50 balls. MI skipper Rohit Sharma stepped in on the big day to score a half-century in which he made 68 runs from 51 balls. Sachin Tendulkar who was part of MI's campaign during their 1st IPL trophy victory seems to be delighted with the Mumbai's record 5th title victory. Netizens Hail Rohit Sharma For Leading Mumbai Indians to Win IPL 2020 Finals Against Delhi Capitals.

Sachin Tendulkar played his last IPL match against Sunrisers Hyderabad on May 13, 2013, at Wankhede Stadium. The Master Blaster has been a big support for the Mumbai Indians franchise even after his retirement and after Mumbai's victory in MI vs DC Dream11 IPL 2020 final he has all reasons to smile.

(The above story first appeared on LatestLY on Nov 11, 2020 12:15 AM IST. For more news and updates on politics, world, sports, entertainment and lifestyle, log on to our website latestly.com).