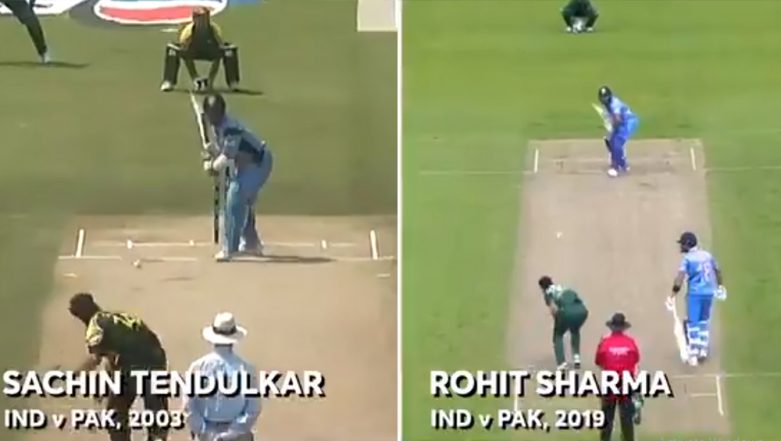 Sachin Tendulkar, arguably the greatest batsman ever, has given a fitting reply to the International Cricket Council (ICC). The batting legend showed his witty side and replied to the the cricket body's tweet comparing his shot in the ICC Cricket World Cup 2003 India vs Pakistan match to Rohit Sharma's cut during the India vs Pakistan game in the ICC Cricket World Cup 2019 on Sunday, June 16. Rohit Sharma in CWC 2019 or Sachin Tendulkar IN CWC 2003, Who Played Better Square Cut for Six During India vs Pakistan Match in World Cup? ICC Asks Fans (Watch Video).

"We both are from INDIA and in this case, AAMCHI MUMBAI as well....So heads I win, tails you lose! 😜" said Sachin in his reply

We both are from INDIA and in this case, AAMCHI MUMBAI as well....So heads I win, tails you lose! 😜 https://t.co/doUMk1QU2b

The highly anticipated match between arch rivals India and Pakistan in the ICC Cricket World Cup 2019 turned out to be a one-sided contest with Indian openers Rohit Sharma and KL Rahul posting a partnership in excess of 100 runs. Rohit Sharma hit a brilliant 140 of just 113 balls and Virat Kohli played an innings of 77 runs to help India post 336/5 on the board. Pakistan lost the match by 89 runs through DLS method. Rohit Sharma was awarded the Player of the Match for his splendid effort with the bat.