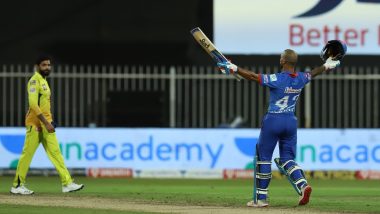 Delhi Capitals and Chennai Super Kings battled it out in the middle at the Sharjah Cricket Stadium in Sharjah. In the end, it was Axar Patel who slammed three sixes in the last over when the team needed more than 15 runs from the last six balls of the Dream11 IPL 2020.  It wouldn't be wrong to say that the all-rounder rescued the team from the crisis. Even Shikhar Dhawan remained unbeaten scoring a century and needless to say that the netizens hailed the Axar Patel and Shikhar Dhawan for their performance. But looking at the tweets, let’s have a look at how the game panned out for both teams. So it was the Yellow Army who walked away with the toss and elected to bat first. DC vs CSK Highlights Dream11 IPL 2020.

Faf du Plessis scored a half-century and Ambati Rayudu scored 45 runs. MS Dhoni once again had a bad outing and made way to the pavilion on the score of 3 runs. A cameo from Shane Watson of 36 from 28 deliveries helped the team reach a total of 179 runs on the board. Now, Prithvi Shaw once again scored a duck, Ajinkya Rahane made 8. Both left to the pavilion quite early in the match. It was Shikhar Dhawan who stood tall scoring century and remained unbeaten. A cameo from Shreyas Iyer and Marcus Stoinis eased out the pressure a bit. But it was Axar Patel scored three sixes when DC needed 15 runs from five balls and thus led the team to a win. Now, let's have a look at the Twitter reactions:

What a match winning knock by Gabbar!!

Today axer has proved that

He is such an important player in this team

With this, Delhi Capitals have moved to the top spot of the IPL 2020 points table. Shreyas Iyer has 14 points in their kitty winning seven games and losing a couple of matches.

(The above story first appeared on LatestLY on Oct 17, 2020 11:54 PM IST. For more news and updates on politics, world, sports, entertainment and lifestyle, log on to our website latestly.com).