Both sides have had plenty of match practice, having played some intense matches in the first round and would be taking on each other in a battle for supremacy. Sri Lanka look to be the side with more momentum as they are yet to lose a match while Bangladesh have rediscovered their mojo and would aim to carry on in a similar way. 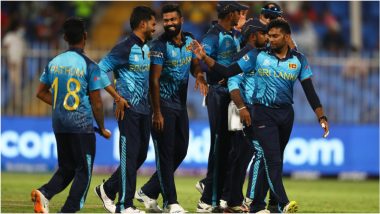 All smiles in the Sri Lankan camp after their Round 1 win over Netherlands (Photo credit: Twitter)

Sri Lanka and Bangladesh are set to cross swords against each other in a Super 12 encounter at the Sharjah Cricket Ground on Sunday, October 24. The match would begin at 3:30 pm IST (Indian Standard Time). Sri Lanka have turned out to be one of the most in-form sides heading into the Super 12 stage in this competition. Not just because they have won all three matches and have a 100% win record in Round 1 but also because of the fact that they have performed as a team, not remaining dependent on just one player to perform. With a fairly inexperienced squad in their ranks, Sri Lanka have shown a lot of promise so far and it is time that they deliver in the main draw, to keep alive their hopes and dreams of winning back the T20 World Cup title, which they had won in 2014.SL vs BAN, ICC T20 World Cup 2021 Super 12 Dream11 Team Selection: Recommended Players As Captain and Vice-Captain, Probable Line-up To Pick Your Fantasy XI

Bangladesh on the other hand, too have had separate performers in Round 1 but no one was better than Shakib Al Hasan with the all-rounder's individual brilliance being one of the most important factors in his side's march up to the Super 12 stage. After a setback against Scotland, they have made some changes to their squad like dropping Soumya Sarkar and including Mohammad Naim in his place at the top of the order and that has seemed to pay off. For Shakib, the job is half-done and if Bangladesh have to make an impact in this competition, then he would be the man to look forward to. SL vs BAN, Sharjah Weather, Rain Forecast and Pitch Report: Here’s How Weather Will Behave for Sri Lanka vs Bangladesh T20 World Cup 2021 Clash at Sharjah Cricket Stadium

The key players for Sri Lanka would be Kushal Perera and Wanindu Hasaranga whereas for Bangladesh, it would be the experienced duo of Shakib Al Hasan and Mahmudullah, whose performance is expected to matter the most.

Wanindu Hasaranga vs Shakib Al Hasan would be a very interesting battle as these two players are two top all-rounders in modern cricket. Also, the duel between Kushal Perera and Mustafizur Rahman would be one to watch out for.

The clash will be played at the Sharjah Cricket Stadium in Sharjah on October 24, 2021 (Sunday). The SL vs BAN encounter has a start time of 03:30 pm IST (Indian Standard Time) with toss taking place at 03:00 pm.

Fans can live telecast the Sri Lanka vs Bangladesh match live on Star Sports channels. The SL vs BAN match in T20 World Cup 2021 live telecast will be available on Star Sports channels in English and well as regional commentary languages. Fans looking for how to watch the SL vs BAN live streaming online can watch the match live on the Disney+Hotstar app as well as on the website. Fans watching the live streaming online on Disney+ Hotstar will have to pay a nominal fee and subscribe to catch the live-action.

(The above story first appeared on LatestLY on Oct 23, 2021 06:44 PM IST. For more news and updates on politics, world, sports, entertainment and lifestyle, log on to our website latestly.com).