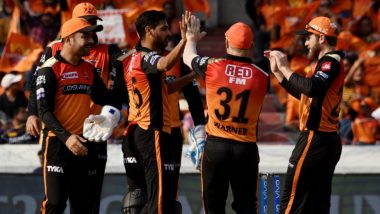 Sunrisers Hyderabad will begin their IPL 2020 campaign when they take on Royal Challengers Bangalore on September 21, 2020, at the Dubai International Stadium. The franchise won their first title back in 2016 and with the likes of David Warner, Kane Willaimson and Rashid Khan in their ranks, they will fancy their chances this season and will be hoping to get their hands on the trophy once again. SRH Squad for IPL 2020 in UAE: Check Updated Players' List of Sunrisers Hyderabad Team Led by David Warner for Indian Premier League Season 13.

David Warner has been reinstated as then captain of the team ahead of Indian Premier League 2020 and he will be taking over the mantle from Kane Williamson, who led SRH to the finals in 2018. Sunrisers have added some quality players to their side during the player auction and will be looking to start the season on a positive note with a win. So before Sunrisers Hyderabad take on RCB in their opening game, here is a look at their probable starting XI. SRH Team Profile for IPL 2020: Sunrisers Hyderabad Squad in UAE, Stats & Records and Full List of Players Ahead of Indian Premier League Season 13.

Openers: Sunrisers Hyderabad have two of the most explosive batsmen in world cricket at the top of the order in David Warner and Johnny Bairstow. However, both of them may miss the opening game as they will arrive late in UAE due to the England vs Australia series. Hence Wriddhiman Saha is expected to get the nod with Kane Williamson moving up the order.

Middle Order: This remains an area of concern for Sunrises Hyderabad due to the relative inexperience of the players present in that position. Manish Pandey is the senior-most player and will have to play in a crucial role in guying young Priyam Garg and Abhishek Sharma.

All-Rounders: SRH will once again stick with two all-rounders in their line up and they will be Vijay Shankar and Mohammad Nabi. Both these players have been a crucial part of the team set-up in recent season and will once again be important for the franchise if they are to go further in the competition.

Bowlers: SRH’s bowling department is second to none and very few changes are expected in those position from the previous seasons. Bhuvneshwar Kumar will lead the pace attack with Khaleel Ahmed and Siddharth Kaul in support. Rashid Khan will once again be their premier spinner.

(The above story first appeared on LatestLY on Sep 16, 2020 11:50 AM IST. For more news and updates on politics, world, sports, entertainment and lifestyle, log on to our website latestly.com).