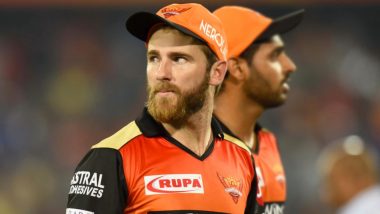 Sunrisers Hyderabad has lost their second game in the IPL 2020 against the Kolkata Knight Riders at the Sheikh Al Zayed Stadium in Abu Dhabi. The match number eight of the IPL 2020 had Shubman Gill standing tall as he scored an unbeaten knock of 70 runs as KKR chased a total of 143 runs on the board. Needless to say, SRH fans were quite upset with the Orange Army and also demanded inclusion of Kane Williamson in the squad. Disappointed fans took to social media and said that it was sad to see him sit at the sidelines of the match. IPL 2020 Points Table Updated.

Sunrisers Hyderabad had been quite poor when it came to the batting as no other player apart from Manish Pandey could be good enough to take the team to a respectable total. Wriddhiman Saha also came under the microscope for his slow inning of 30 from 31 balls. David Warner made way to the pavilion on the  36 runs whereas his fellow opener Jonny Bairstow scored five runs from 10 deliveries. Needless to say that the SRH missed the services of Kane Williamson. Now, let's have a look at the twitter reactions supporting the Kiwi batsman.

Throw any logic at me, how on Earth can @SunRisers not play Kane Willamson in their XI - with a middle order as brittle as their’s the 4 foreign players have to be Warner, Bairstow, Kane and either of Rashid or Nabi. No runs, no victories #KKRvsSRH #IPLwithAajTak #IPL

Kane and Warner should open Manish no.3 Bairstow no.4 Abdul/ garg no.5 vijay/ Sharma no.6 nabi/ Rashid no.7 Bhuvi no 8 Nadeem no.9 khaleel no 10 Natarajan no.11 🙂 with few pieces to play srh needs to do some experiments..

Why not Kane in place of Bairstow?

Why not kane in place of baristro? Shah as a opener and nabi nd rashid can provide lower fire lower in which they are lacking

Kane should be the captain of the side. Warner has been very inconsistent in recent past.

Talking about the match, Sunrisers Hyderabad, won the toss and elected to bat first. They put up a total of 142 runs. Dinesh Karthik's team won the game with two overs to spare. Shubman Gill has been adjudged as the Man of the Match for his prolific knock.

(The above story first appeared on LatestLY on Sep 26, 2020 11:25 PM IST. For more news and updates on politics, world, sports, entertainment and lifestyle, log on to our website latestly.com).